It’s been a long hot summer and much has happened while we were on vacation. The Newtown Board of Supervisors (BOS) has received many comments from residents this summer regarding several issues – especially pedestrian safety, Lower Dolington Road trail delays, and women’s reproductive rights (i.e., abortion). Residents joined me via Zoom to discuss these and other issues at the September 12, 2022, Meet Mack Monday meeting. 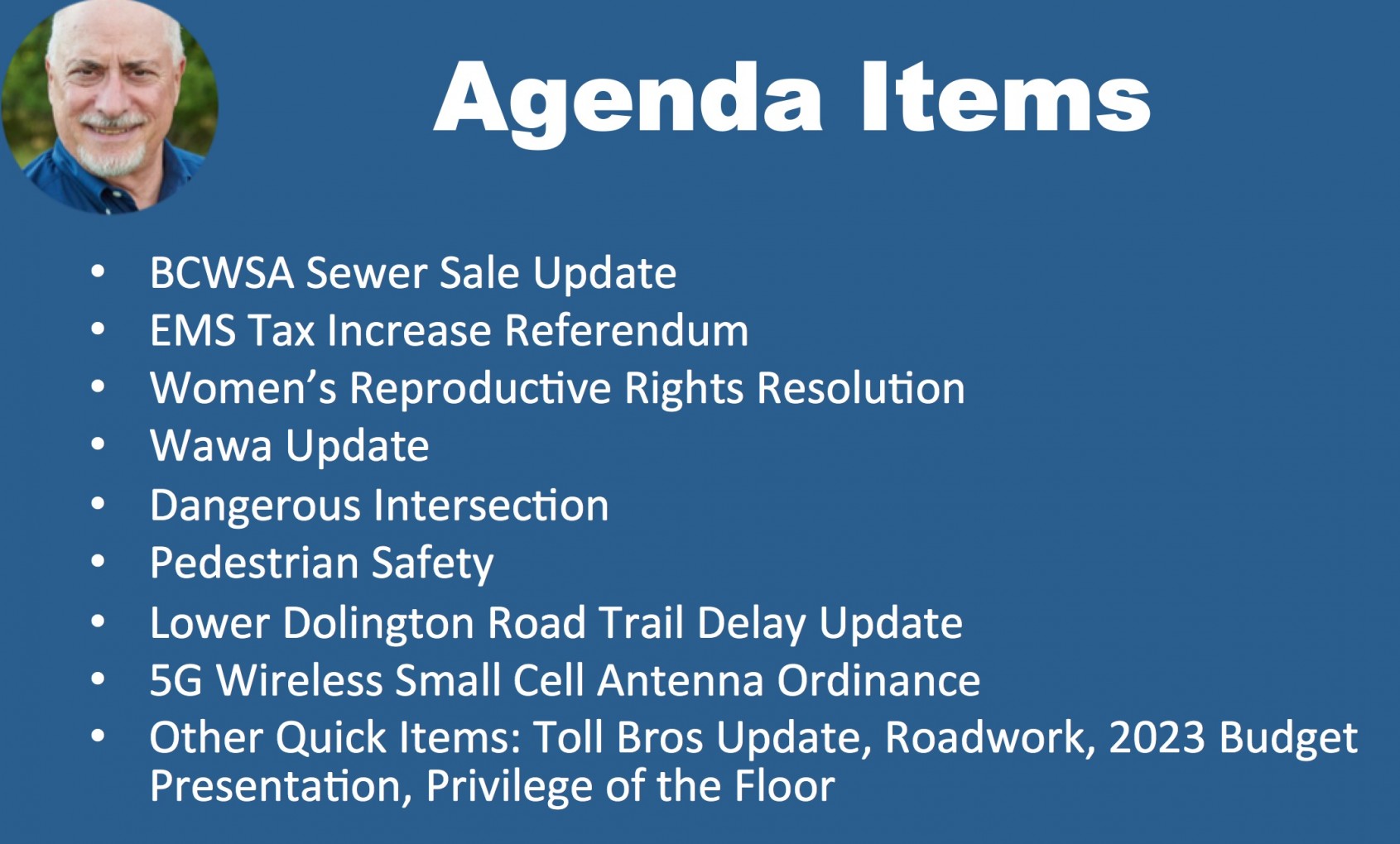 Disclaimer: This was not an official Newtown Township meeting. It was hosted by Newtown Supervisor John Mack to learn more about issues of concern to Newtown Township residents and to share ideas on important issues.

Download/View the Detailed Meeting Notes Below...

Taxes: At the August 10, 2022, BOS meeting, the supervisors approved a resolution to place a referendum on the November ballot that asks residents “Do you favor the imposition by Newtown Township of an additional one-half (1/2) mill of real estate tax annually to support ambulance, rescue, and other emergency services serving Newtown Township?” Why was this done? How much more money will taxpayers pay? Based on this survey, how likely is it that voters will approve this referendum?

Resolution to Support Women’s Reproductive Rights: “... affirms and commits to supporting access to reproductive healthcare, including abortion, and condemning any act by the Pennsylvania General Assembly or Congress of the United States to restricting access to that care.” Should this resolution be approved by the BOS at its Sep 14 2022 meeting?

UPDATE: At the September 14, 2022, BOS meeting, supervisors voted 3-2 to table the motion to vote on this resolution.

Roadwork: This year Newtown will spend over $800,000 to repave about 3.4 miles of roads and also improve road markings for safety. About $500,000 of that comes from the state liquid fuels program (gasoline tax). Is this enough? Do we need to pave more miles per year to get ahead? What about next year? Where will the money come, especially with more and more electric cars on the road?

BCWSA Sale: Bucks County Water and Sewer Authority (BCWSA) recently announced that it is considering an offer from Aqua to purchase its sewer (but not water) assets for $1.1 billion dollars. Will this increase your sewer rates even though the Newtown Sewer Authority is not part of the sale? What do supervisors think of this proposed sale?

Wawa Update: Land Development Application will be reviewed & voted on by supervisors at September 28 meeting (tentative). Meanwhile, Provco submitted a Highway Occupancy Permit (HOP) application to PennDOT, which had some important concerns, questions, and requests for further information.

Pedestrian Safety: Several residents of Newtown Walk are concerned with pedestrian safety at the intersection of Tara Boulevard and Washington Ave. This crossing allows residents access to the Newtown Township Trail, Newtown Borough, and points East along Newtown-Yardley Road. Although piano striping has been added to the crosswalk to make it more visible, residents are requesting more; i.e., a pedestrian-activated beacon or flashing light. The NT Police Department did an “enforcement initiative” study – what was the conclusion? What further actions are being pursued by township officials?

Lower Dolington Road Trail: No work has been done on the trail since the middle of March, 2022, according to my observations. What’s holding things up? When will this project be completed?

See the meeting notes embedded below or download the PDF file here.