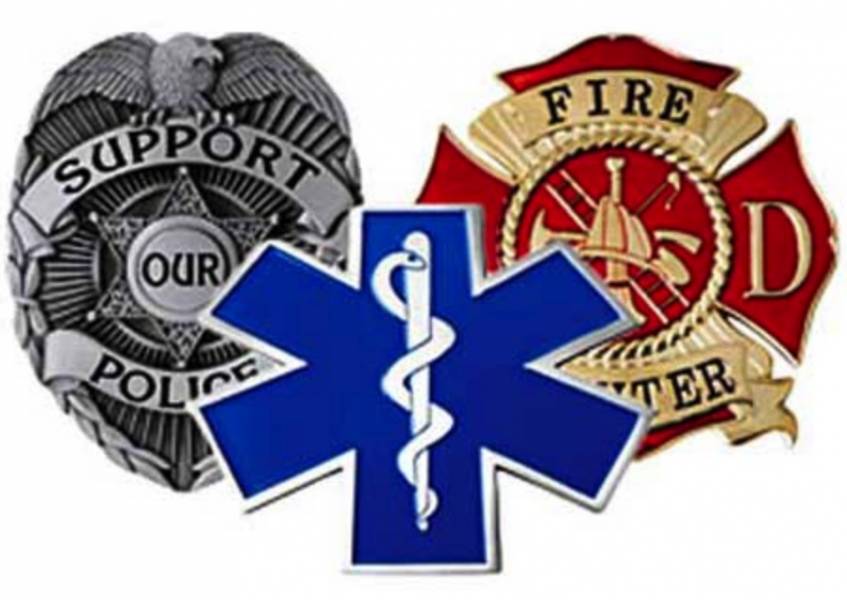 More than that, however, I believe it is my duty to do whatever I can to ensure the safety of the citizens of Newtown. This duty involves overseeing the police department, emergency services, and helping to fund the Newtown Fire Association (NFA). Part of my responsibility as a Supervisor is being a member of a joint Newtown Township-Newtown Borough Commission comprised of two Supervisors, two Borough Council members, two members of the NFA and the Township EMS Chief. The goals of this commission are to improve the working relationship between NFA and EMS, evaluate equipment needs, coordinate fire call data and training records, and improve recruiting and financing.

Excerpts from Board of Supervisors Meeting Minutes

Details of important Public Safety related Newtown Board of Supervisors' Definition decisions and discussions in last few years (organized by issue in reverse chronological order). This is NOT a complete list of items. You can find complete minutes of BOS meetings here.

13-Nov-2019: ACT 79. Chief Hearn reported the department responded to 1,803 calls for service during October including 14 arrests, 83 traffic collisions and 215 traffic citations and the department continues to focus on aggressive driving. The Chief said one arrest was for theft from vehicles, and he reminded all to keep vehicles locked as there have been several sprees of theft from unlocked vehicles. Mr. Mack asked about ACT 79 noncompliance. The Chief explained the new law implemented in April where anyone who gets a protection of abuse order and owns a firearm will be required to relinquish their firearm.

10-Jul-2019: Social Media. Chief Hearn reported there were 1,603 calls for service during June. There was one death investigation, two non-fatal overdoses and four arrests. Two arrests were for DUI, one for bank fraud and the other domestic assault. Chief Hearn then informed all that in addition to Facebook and Twitter, the Police Department is now participating in the Next Door app which gives residents another social media outlet to obtain information from the Department. Mr. Mack said he was pleased to see the PD posting on Next Door since many residents use the app.

9-Jun-2019: Speeding. Chief Hearn reported there were 1,633 calls for service during May including 16 arrests, 11 which were DUI related; there was one incident where a sergeant successfully administered Narcan and one corruption of minor arrest. Mr. Mack expressed concern on behalf of residents who are concerned about speeding on Sycamore and mentioned there was recently a pedestrian accident there. Mr. Mack also inquired about utilizing LED speed indicators and blinking lights at pedestrian walkways. The Chief said the LED signs are owned by the police department and are moved to where needed. He also reviewed additional initiatives the department uses to enforce speed limits.


8-May-2019: Hate Crimes. Police Chief John Hearn presented the Calls Report for April 2019. In April, the Newtown Police Department responded to 1,686 total calls, 300 (18%) of which were in Wrightstown Township. Mr. Mack asked about recent anti-Semitic graffiti in Tyler Park. Chief Hearn said that this incident was in the Northampton portion of the park and is being investigated by the State Police. Newtown has 13 places of worship; the Department has a presence at all major holiday worship services but otherwise does circulate among these churches and synagogues. He has reviewed the files and found no incidents of hate crimes in our township in the last three years.

10-Apr-2019: Mr. Lewis explained that the Emergency Action Plan (EAP) is required by our insurance carrier. Chief Forsyth presented the EAP which was written in compliance with NFPA Standard 3000 and Homeland Security standards. Chief Forsyth is looking for the Board’s approval of the EAP so staff training can begin. The purpose of the EAP is to ensure staff is trained and prepared for any critical incidents that may occur. Mr. Mack asked if the Board would be trained and Chief Forsyth said yes they could be.

11-Oct-2017: Geographic Information System (GIS) Mapping Technology. Mr. Ferguson commented that the 2018 budget will include expansion of the Geographic Information System (GIS) Mapping Technology capacity for Police and Fire personnel. This function can quickly locate fire hydrants in snow storms, identify all of the inlets in case there is a concern of damage to the water supply, etc.

14-Feb-2018: Fire Apparatus Study/Fire Needs Analysis.  Mr. Ferguson asked that a motion be made to hire Dr. Harry Carter, not to exceed $18,900, to evaluate fire safety equipment and personnel. This was a budgeted item. Mr. Calabro called the motion, and the motion passed 4-0.

25-Oct-2017: Fire Apparatus Study. Fire Chief Forsythe and Mr. Ferguson have been working on an apparatus study and prepared a rough draft of an RFP to be submitted by December 15. A steering committee consisting of Township, Borough and NFA representatives will help facilitate the completion of the report.

9-Aug-2017: Review of Accomplishments. Just completed is a standard operating guide which combines the two departments' operations in one book, we have collaborative efforts working on training, fundraising, beer fest, recruiting efforts, the Act 172 Plan for the benefit of the volunteers, we also made great progress on sharing a computer system, reporting fire call data and training records. We are making progress in this relationship to the credit of Mrs. Dix, the mayor, and head of the Borough Council, Mr. Walker, and the three fire chiefs in the fire departments.

26-Apr-2017: Manager's Report Newtown Fire Association Agreement. Mr. Ferguson asked the Board to approve an extension of the existing NFA agreement through December 31 , 2018. This will allow for continued negotiations without a time pressure. The motion passes 5-0.

9-Nov-2016: Removal from Budget funding for a Township Volunteer Fire Department.  Mr. Davis said that since the last meeting, the Supervisors have met individually with members of the Newtown Fire Association, Newtown Borough Council and Newtown Borough's mayor and the Township Manager and have now removed consideration of a Township volunteer fire company from the budget and will keep our agreement with NFA.

26-Oct-2016: Establishment of Fire Commission.  Mr. Ferguson said that he believed many residents were in attendance to discuss issues raised in his budget presentation regarding fire protection. He explained that after a study was conducted on the Township's fire protection, it was recommended that the Township hire a fire chief to oversee both the paid EMS department and the all-volunteer Newtown Fire Association. Extensive public discussion followed. Mr. Gallagher applauded Mr. Ferguson's efforts to address the fire agreement through the budget process but also would like to further examine continuing our agreement with the NFA. He urged forming a commission with two Supervisors, two representing Borough Council, two NFA members. The partnership between the Township and NFA goes back 127 years and should not be rescinded lightly. Mr. Couch said that he has great respect for what our volunteers in the NFA do. He believes the issues may be structural and that there are possibly ways to address the differences other than rescinding the partnership. He offered to serve on any committee or commission formed to examine this issue further. Mrs. Dix asked Mr. Gallagher who he would want on a commission to review this matter. Mr. Gallagher suggested two Supervisors, two Borough Council members, two members of the Newtown Fire Association and Chief Forsyth.

9-Jan-2013: 2013 Fire Services Agreement with Newtown Fire Association.  Mr. Ferguson asked the Board to approve this one-year fire services agreement between the Township and the Newtown Fire Association. The agreement provides for fire service coverage from the Association for a set payment and defines terms of control at the scene of fire emergencies. It addresses some concerns with training for both the Township EMS Department and the volunteers. The agreement will run for one calendar year, with a goal of working out a long term agreement during the course of this year. The agreed upon cost to the Township will be $150,000. Dr. Ciervo questioned the wording of the agreement regarding structure of command. He did not want any difficulty as to command when the fire chief responds to events where Fire Association members have arrived first. Mr. Ferguson said that when EMS responds between 6:00 AM and 6:00 PM, Monday through Friday, the Township’s EMS Department is in charge, even should the fire chief not be in attendance. The agreement attempts to provide continued command through the course of the event.

13-June-2018: Gun Safety Resolution. The board voted 4-1 (Kyle Davis voting “nay”) to pass a non-binding “gun safety” Resolution Definition. This is the same resolution passed by other municipalities, including Yardley Borough (more here...). The resolution (here) states that as many as 116,225 people are shot each year in America, and that 35,141 people die from gun violence in "murders, assaults, suicides, suicide attempts, unintentional shootings or by police interventions." The resolution was passed after testimony from several Council Rock students (see video below).

28-Feb-2018: Guns in Parks. Mr. Calabro requested the Solicitor to review the ordinance regarding people to carry weapons in the Township parks; it was mandated by the State legislature. He believes the Townships can reverse this. Mr. Calabro went on to state that the Township has seven schools and a few colleges. It is the intent of the Township to keep everyone safe, and not intending to impinge of the Second Amendment, but to ban anyone carrying a concealed weapon in the parks.

28-Feb-2018: Police Dept Reorganization. Authorization is sought to advertise an Ordinance amending the Newtown Administrative Code of 2000, as amended, to provide for two Lieutenants within the Newtown Police Department. No new personnel are proposed. Mrs. Dix made a motion to approve. Ms. Bobrin seconded, and the motion passed 5-0.

9-Aug-2017: Police Pension. Board authorized for advertisement the ordinance which would amend the police pension ordinance so as to eliminate the Killed In Service provisions in the ordinance. The reason for that is that the State legislature adopted a statute to basically assume the responsibility for benefits to surviving heirs in the event of a police officer's death in the line of duty. Based on that recommendation, the ordinance was prepared, reviewed by the manager and advertised in the Courier Times. There needs to be a public hearing.

9-Jan-2013: Ordinance Amending the Administrative Code to Eliminate the Position of Police Captain. Mr. M. Gallagher said that the Ordinance Definition will eliminate the office of police captain, allowing for one police lieutenant who will be second in command to the police chief. The qualifications for this position as well as the job description have been modified to more efficiently fit the needs of the police department. In addition, the position of police business manager has been eliminated, with those duties now part of a new position of police administrative assistant.