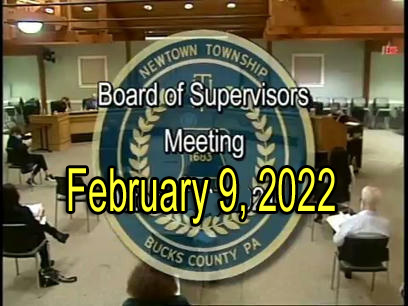 This is my personal summary of the February 9, 2022, meeting of Newtown Township Board of Supervisors (BOS). This is not a complete nor an official summary. See my meeting notes for more details.

Resident Frank McCarron asked "Who Will Pay for Gun Show Security & Traffic Control?" He made other comments and suggestions. Afterward, Mr, John D'Aprile called him and other gun show commenters "cry babies." Watch the video clip below:

On February 2, 2022, at the invitation of Council member Amy Lustig, I attended a Newtown Borough Council Work Session at which Mr. Don Hayden presented a synopsis of a plan to for implementing a “Walk-Friendly Newtown” initiative. The objectives of the initiative include enhance pedestrian safety, improve walkability, and increase community engagement. A near-term goal is to contact Walk-Friendly Communities (WFC) Program to determine Newtown Borough eligibility.

It is my hope that Newtown Township can collaborate with the Borough to achieve an expended walk-friendly Newtown that includes N Sycamore St, which borders the Borough and receives many walkers from the Borough.

According to the township engineer's 25 Jan 2022 review of the traffic study, several intersections in the shopping center are experiencing significant delays, but we didn't a traffic study to know that! The study, however, quantifies the wait times.

According to the review, traffic at several intersections are experiencing significant delays:

Re: "Consider mitigation factors": I noted that the development agreement with Brixmor specifically states that “the DEVELOPER shall perform, at its sole cost and expense, a traffic study, and DEVELOPER shall install, at its sole cost and expense, those additional traffic improvements that DEVELOPER and TOWNSHIP mutually agree are necessary as a result of DEVELOPER’S traffic study." This is much stronger language than "consider."

According to the February 4, 2022, Engineering Report, with regard to N. Sycamore Street Pedestrian Safety concerns:

One item NOT included in the report is the recommendation to install TS60-RRFB LED Rectangular Rapid Flashing Beacons (RRFBs). RRFBs are used to supplement warning signs at uncontrolled intersections or mid-block crosswalks.

*I had concerns about lighting: With regard to upgrading street lights on N Sycamore to brighter LED lights. Given the antique nature of the current street light fixtures, will this be possible? Also, will it be adequate? As opposed to standard, higher street lights such as those at the Jefferson Street intersection?

Resolution on Use of American Rescue Plan Funds

In line with recommendations from PSATS and GFOA, it is recommended the Board elect the entirety of the $2,049,842 Rescue Funds as lost revenue. This will allow for the greatest flexibility of expended use. This election should be made in advance of the Treasury report due from Newtown by April 31, 2022.

The Newtown Township staff has evaluated current capital needs with the strategy of maximizing effective use and life of proposed capital projects and equipment; maximizing public benefit; reducing current and future maintenance costs; and enhancing the services offered by Newtown Township. Here are a few of the items included in the staff "wish list":

The supervisors authorized the township to implement Proposal #3 by Video Gold [for online streaming of Board of Supervisors meetings in the amount of $4,900. In addition, the township will provide an email address by which residents can submit questions/comments to the BOS in real time. These comments will be read out loud during the meeting and become part of the public record.

Embedded below are my notes that I prepared before the meeting. It includes questions and links to background information and other details. You can also download the PDF file.