Trees Removed in Village at Newtown

Newtown resident Tina Cameron comments about the trees that were cut down to make way for a drive-thru Starbucks and other stores/banks in the Village at Newtown shopping center. This lead to comments from the Board of Supervisors regarding possible remedies. View this 9-minute video clip:

Other Residents Speak Out

Supervisor John Mack called attention to this issue at the June 27, 2018, Board of Supervisors meeting where he expressed the fear that the “landscaping buffer” mentioned in a settlement with Starbucks would not be as aesthetically pleasing and inviting as the current landscaping at that location (read "Drive-thru Starbucks is Back on Track!").

This generated a discussion on the Roberts Ridge section of Nextdoor.com. Karol King of Newtown Borough started it off with this: “Does anyone know why on earth all the trees were cut down at Newtown Village??? Infuriating. Unbelievable! Makes me hate it even more! In this day and age of capability, they could have relocated the trees and not chopped them down. I’m going to find out who ok’d that decision.”

Here are some other comments from that discussion, which you can find here:

Carin Moore said: “Hey, it's a reimagination. No trees, whitewashed buildings and a new roof. Marketing! The Village was already barely walkable from Eagle Road (try to walk to Pier One or Harvest). Now we lose the shade. What a myopic vision for such a valuable, wonderful piece of property. A series of strip malls. Oh, we should have done better.”

Debbie Misher said: “There is no way the trees cut were just due to Starbucks - it is truly appalling how many mature trees were taken out. In a town where you need a permit to breathe - this is outrageous.”

Stephanie Hehir said: “I noticed this a couple weeks ago and it just keeps getting worse. It looks awful without the trees. I haven't read all of the posts but I would think that this was in the plans prior to this Starbucks nonsense. I cannot imagine they got permits to do this that quickly. I am guessing brixmor can do whatever they want in there with their remodeling. I admit the building where Harvest is looks really nice but the trees.....It's just awful.”

Karol King said: “So many “probably’s” and “maybes” during the meeting (in my opinion). When a project of this scale is approved, every detail should be ironed out, right down to the landscaping, if the goal is to preserve the integrity of Newtown. And to call the concern for the trees a “scare tactic” is just tone deaf and insulting.”

Jan Filios said: “Now may be the time to urge the BOS to develop a tree ordinance to prevent this from happening again. Also, we should realize that the rest of the trees in the Brixmore shopping center belong to the developer and that puts them at risk as well!”

Plan Calls for Replacing at Least Some Trees 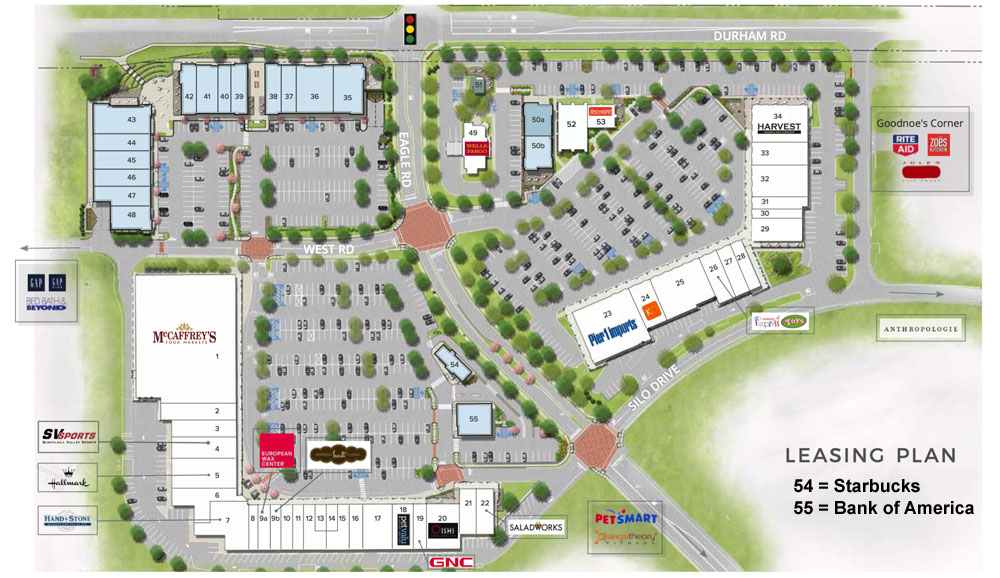 According to the "landscaping plan" for the area around the drive-thru Starbucks it does looks like it includes replacement trees and not just bushes (see section of plan shown below). They may not replace all the trees that were removed and maybe the trees will be yoounger and smaller, but there will be trees. 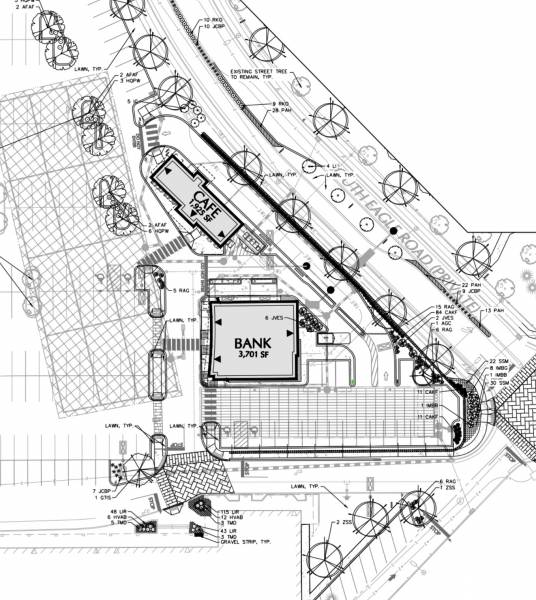