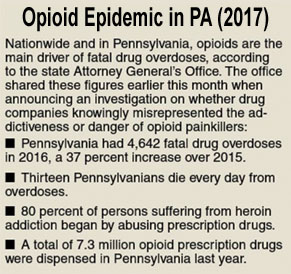 At the April 12, 2017, Newtown Board of Supervisors (BOS) meeting, police Chief Henry Pasqualini admitted that drug abuse is a problem “right here in Newtown.”

Also right here in town is KVK Tech, a generic drug manufacturer whose #1 selling product is oxycodone. This fact is not mentioned on its website.

In July, 2017, the Newtown Zoning Hearing Board granted KVK Tech several zoning variances to expand its manufacturing and storage facility in the heart of Newtown on Terry Drive, just one block from the post office. This "favor" was granted even though KVK Tech would not suffer any harm if the variances were no given because it has a huge facility located on the bypass where Lockheed Martin used to be.

Aside from ensuring the safe and legal use of their products, opioid-producing drug companies should, in my opinion, fund local and national efforts to combat addiction to these drugs. Some areas requiring drug industry support include:

During my campaign for Supervisor I pushed for the implementation of a 24/7 drug drop-off box at the police station.

According to recent research, “Unused opioids prescribed for patients after surgery are an important reservoir of opioids available for nonmedical use and could cause injuries or even deaths.” More than half of adults who misused opioids did not have a prescription, and many obtained drugs for free from friends or relatives, according to a national survey of more than 50,000 adults. That is why the drug drop-off program needs to operate 24/7 in Newtown and, if elected, I will do everything I can to make sure that happens.

A funny thing happened to me on the way to the December 13, 2017, Newtown Board of Supervisors meeting. Well, not really funny, but gratifying! A notice was posted to the front door of the Municipal Building telling people that they now can drop off their unused drugs - including opioid pain medications - at police headquarters even when the office is closed after 4:30 PM, before 8:00 AM and on the WEEKENDS! Here's the current sign: 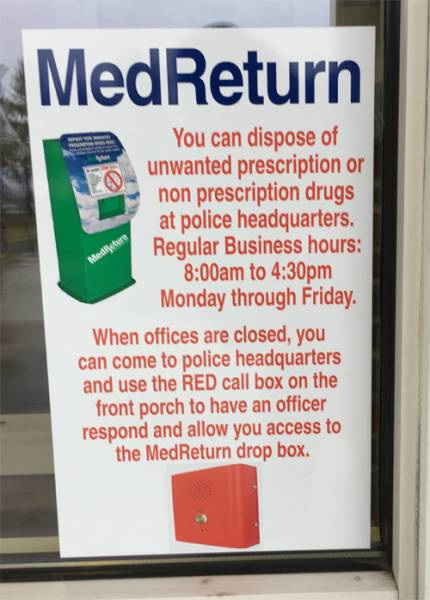 Although this is not as convenient as a 24/7 drug drop-off box that I advocated when campaigning for Supervisor, it is probably the best option for now.