At the December 12, 2018, public meeting, the Newtown Township Board of Supervisors voted 4 to 1 in favor of authorizing Marc J. Bern Partners, LLP, & Cordisco & Saile, LLC to file suit against the manufacturers, promoters, and distributors of synthetic prescription Opioid medications on behalf of Newtown Township (read "Newtown Township Joins Suit Against Opioid Manufacturers and Distributors").

The following video clip documents the discussion before the vote was taken:

The list of defendants includes major drug companies, including Purdue Pharma, which are named as defendants in similar lawsuits filed by other municipalities (read, for example, "Bucks County, Bensalem File Lawsuits Against Opioid Manufacturers in Hopes of Recouping Costs").

To gauge the opinions of local residents regarding this lawsuit, I started an online SURVEY on January 4, 2019. You can find more information about this survey here.

As of January 30, 2019, 138 responses were collected. Approximately 54% (75) of respondents said they were Newtown Township residents and 21% (29) reside in Middletown. See the chart below for more details. 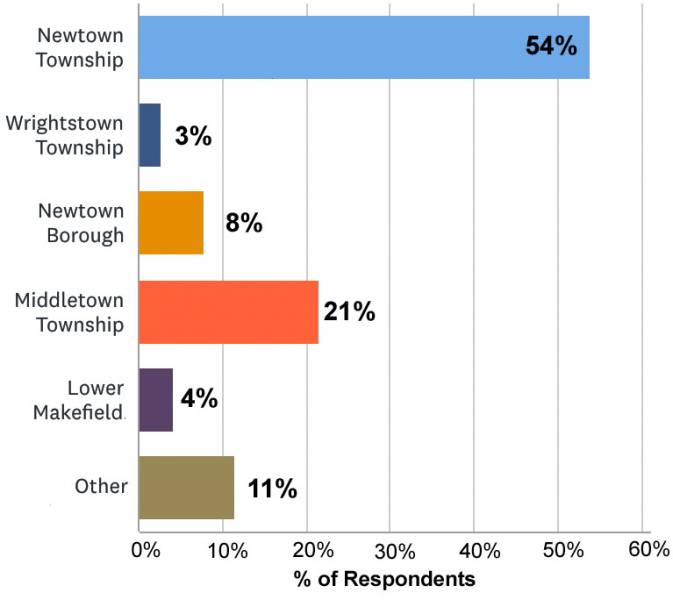 The survey asked: Given what you know about the drug industry's role in the current opioid overdose epidemic, do you support Newtown's decision to sue major opioid producers and distributors?

Overall, “No” responses outnumbered “Yes” responses (49% vs. 42%), although the margin of error is pretty high due to the realtively small number of respondents. The 11% of “Not Sure” survey respondents could tip the scales the other way if they were persuaded to change their vote to "Yes".

What Do You Know About Opioids and Opioid Misuse?

Several statements were presented to survey repondents who were asked to identify the one statement that was NOT true. 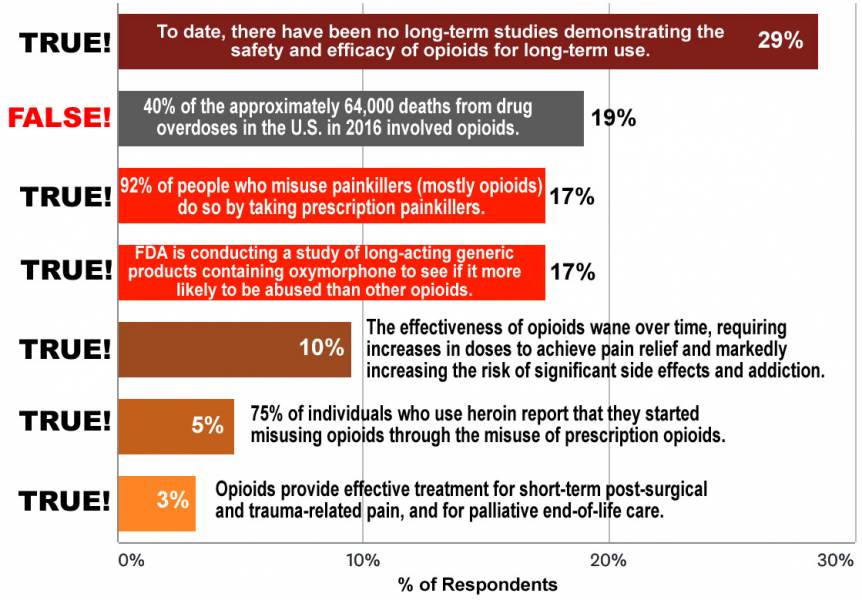 Nearly 30% of ALL respondents believed the statement "To date, there have been no long-term clinical studies demonstrating the safety and efficacy of opioids for long-term use" was FALSE, when it fact it is TRUE  (Ref: "Opioids and the Treatment of Chronic Pain: Controversies, Current Status, and Future Directions"). This is not a surprise because marketing from opioid manufacturers imply that such studies exist.

The statement "40% of the approximately 64,000 deaths from drug overdoses in the U.S. in 2016 involved opioids" is the FALSE statement. The correct percentage is 66%. (Ref: Kounang, Nadia, "Opioids now kill more people than breast cancer.").

The statement "92% of people who misuse painkillers (mostly opioids) do so by taking prescription painkillers" is TRUE. In 2017, there were 11.4 million past year opioid misusers aged 12 or older in the United States, the vast majority of whom misused prescription pain relievers. Specifically, 11.1 million people aged 12 or older in 2017 misused prescription pain relievers in the past year compared with 886,000 people who used heroin. (Ref: Bose J, Hedden SL, Lipari RN, Park-Lee E; "Substance Abuse and Mental Health Services Administration. Key substance use and mental health indicators in the United States": results from the 2017 national survey on drug use and health.)

The statement "75% of individuals who use heroin report that they started misusing opioids through the misuse of prescription opioids" is TRUE. (Ref: Cicero TJ, Ellis MS, Surratt HL, Kurtz SP. The changing face of heroin use in the United States: a retrospective analysis of the past 50 years. JAMA Psychiatry. 2014;71(7):821-826. doi:10.1001/jamapsychiatry.2014.366)

DISCLAIMER: This is not an official Newtown Township approved survey. Its purpose is solely to inform John Mack – a Newtown Supervisor – of the public’s opinion regarding this issue.