The Bucks County Courier Times reports that it filed “60 right-to-know requests, seeking the total wages paid to all full- and part-time government workers in 2017” (read “To Be Revealed: What Local Government Employees Earned in 2017”).

Coincidently (?), American Transparency, a non-profit group that publishes OpenThe Books.com, sent right-to-know requests to many, if not all, PA municipalities – including Newtown Township – asking for a copy of the following records: “An electronic copy of any and all employees for year of 2017, (fiscal or calendar year). Each employee record should contain the employer name, employer zip code, year of compensation, first name, middle initial, last name, hire date (mm-dd-yyyy), base salary amount, bonus amount, overtime amount, gross annual wages and position title.”

Newtown complied with the request since it maintains these records and by law “it is not exempted in any way by the Right-to-Know Law… subject to redaction as permitted by the Law,” according to the Township Solicitor.

Other townships, however, have denied the request, contending they do not maintain the exact records requested. “I have denied more than my fair share of requests lately solely based on the fact that I have no report that includes every piece of information they are requesting,” says Heidelberg Township Office Manager. “I may have a report that comes close, but I'm not providing it because it is not what they are asking for. Is that a hardline to take? Maybe. If they wish to amend their request, that is fine. I would then provide the report that satisfies their request. But please don't be fearful of denying if you don't have it to give. Maybe if we all did that, they would stop asking.”

Well, that’s not a very transparent attitude, I must say!

So what wages and salaries do Newtown Township employees earn? You can easily find that information for 2018 in the approved budget published on the township’s website (here). Here are some more recent numbers:

I’ve summarized the 2018 data in the following pie charts. 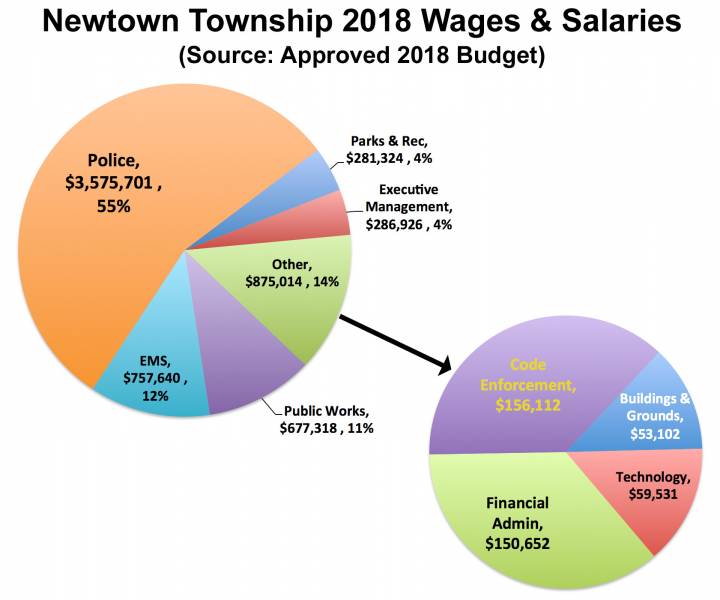 Numbers Are Not the Whole Story

Numbers alone, however, do not tell the whole story. For example, because Mr. Ferguson fulfills the role of Finance Manager at very low compensation level of $10,000 per year, the Township does not have to hire someone else at more than $80,000 per year to fill that role. This has saved an estimated $500,000 over the 6 years of Mr Ferguson's tenure. Keep in mind that Mr. Fergison works many additional hours every week without additional pay.

The following table from a Pennsylvania State Association of Township Supervisors (PSATS) report shows the full-time hourly rates in 2016 for management and police employees in townships with populations over 8,000 (Newtown has a population of over 19,000). 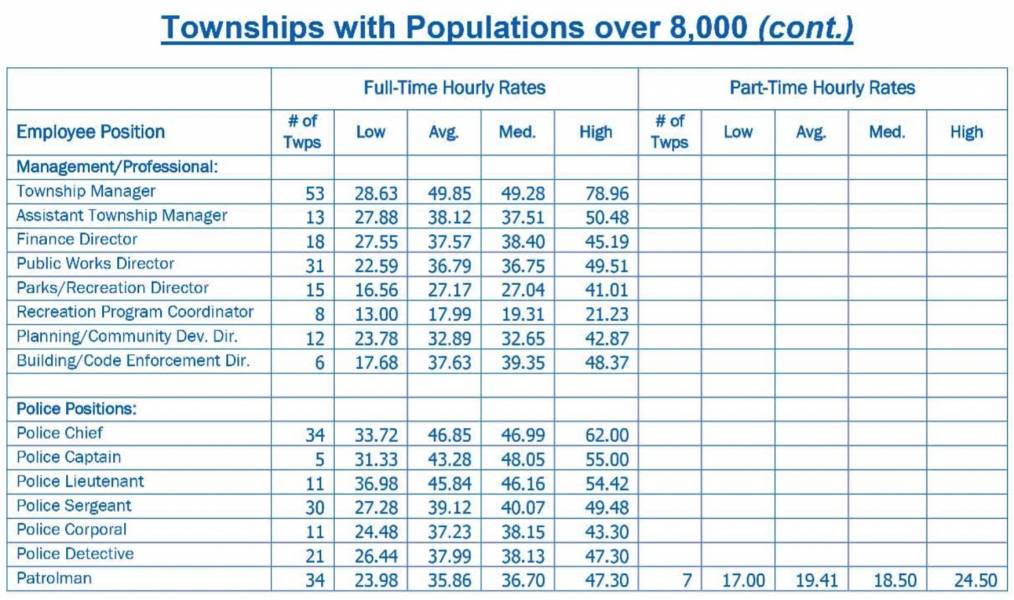 These numbers are based on data reported by 72 townships. To compare apples to apples, you have to convert hourly rates to yearly salaries using the equation 37.5 hours per week X 52 weeks X hourly rate.

BTW, Newtown Township Supervisors receive an annual income of $4,125 per! For me that works out to be about $41.00 per hour to attend Board of Supervisors meetings. It does NOT include the many hours I spend attending other meetings such as meetings of Parks & Recreation, Technology Committee, JMZO, Planning Commission, etc. It also does not include the many hours I spend preparing for these meetings! This wage is set by law and it has been the same since at least 2015. I say it's time for an increase!

APRIL 9-13 IS LOCAL GOVERNMENT WEEK— an entire week dedicated to commending the hard work that local officials - including Supervisors, Township Management personnel, and Township employees - put into our township. Local Government Week honors the dedication of Pennsylvania’s local officials and encourages citizens to learn how local government functions and affects each resident and business in the community.

There are an array of services that local governments provide to residents they may not be aware of. See the infographic below prepared by the Pennsylvania State Association of Township Supervisors (PSATS): 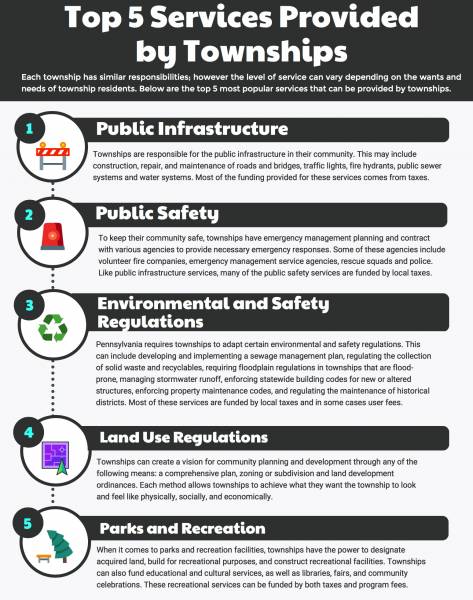 How Well Do You Know Your Rights to View Public Documents?

I have a personal interest in access to public information. At the July 6, 2017, Newtown Township Zoning Hearing Board meeting, before I was elected Supervisor, I asked Solicitor James J. Auchinleck, Jr, if it was OK for me to use my cell phone to video record part of the meeting. My polite request was denied and consequently I have no video record of my testimony in opposition to KVK Tech’s request for zoning variance (if you are interested, you can read a version of my comments as recorded in the minutes of that meeting here). 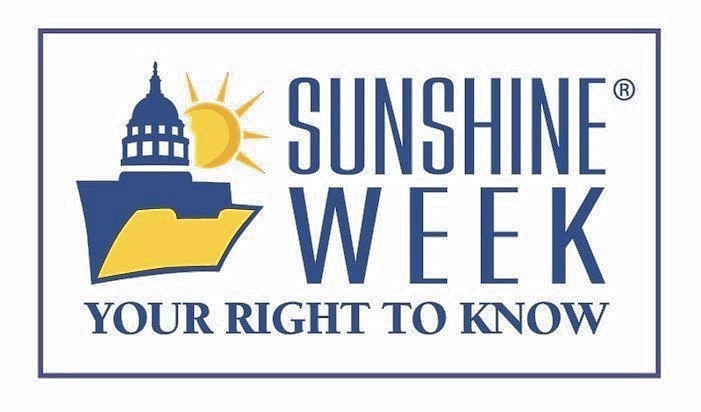 Citizens from across the country are now gearing up for this year’s Sunshine Week – March 11-17 – to once again spark a nationwide discussion about the critical importance of access to public information. Sunshine Week was created by the American Society of News Editors and is now coordinated in partnership with the Reporters Committee for Freedom of the Press, but freedom of information isn’t just a press issue. It is a cornerstone of democracy, enlightening and empowering people to play an active role in their government at all levels. It helps keep public officials honest, makes government more efficient and provides a check against abuse of power.

To participate in this “event,” I decided to host a Right-to-Know Quiz. This short, 6-question quiz (below) tests your knowledge of the PA Right-to-Know Law and provides information about how to make requests for public records from Newtown Township.

Create your own user feedback survey

Broadcasts of Newtown Board of Supervisors Meetings

The Newtown Board of Supervisors (BOS) meetings are recorded and can later be viewed via channel 22 on Comcast Xfinity and Chanel 40 on Verizon FIOS (see schedule below). You can also view the meetings live on these channels. Videos of past meetings can also be viewed on the Township website here. 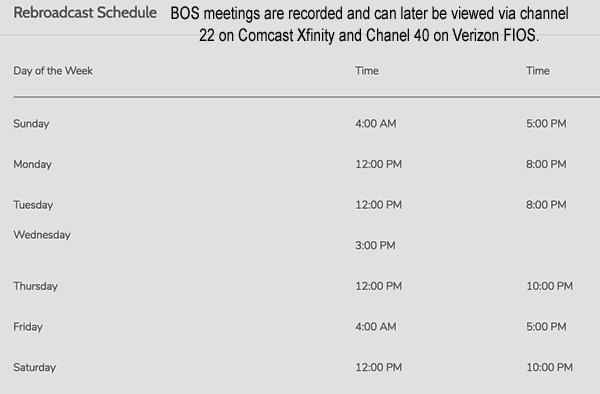 WARNING! The video quality really stinks! This is just one of the things I'd like to improve so that residents can better see and hear what's going on at these meetings. It's part and parcel of government transparency, IMHO!

John Mack's comments made at the January 2, 2018, Board of Supervisors Reorganization meeting.