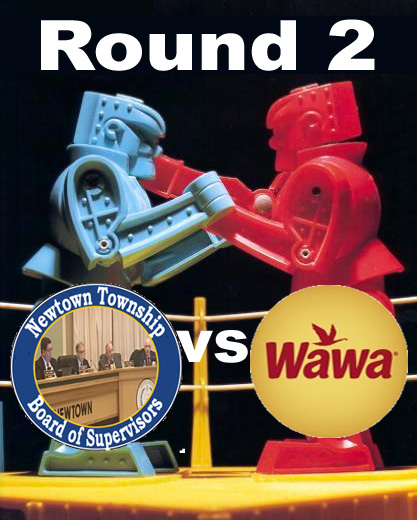 Round 2 of Newtown vs Wawa was held at the July 8, 2021, Zoning Hearing Board (ZHB) hearing before a scant “crowd” of about a half-dozen citizens. Wawa developer Provco Pineville Acquisitions’ witnesses outnumbered the curious residents who decided to stick around even though they were warned that public comment can only be heard after all the testimony was finished, which might happen after three hours or not at all that night.

As it turned out all the testimony and cross-examine of Wawa’s witnesses ended after about two and a half hours. It was decided that Newtown’s lone witness would be heard at the next ZHB meeting on August 18, 2021 (listen to his testimony).

Most of the testimony, evidence and cross-examination at the hearing concerned the signage. This was also true of the first part of the hearing on June 3, 2021. Listen to audio snippets from that meeting: “Newtown Township Versus Wawa: Round 1, Signage”.

The following are snippets from this hearing. Download the full transcript. 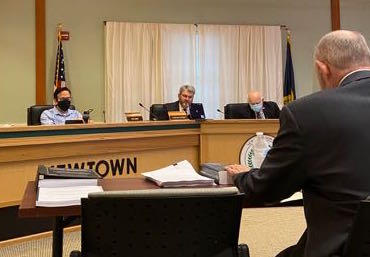 Figure 1: ZHB on July 8. 2021. Newtown Solicitor David Sander is in the foreground. On the dais is Paul Cohen (left), Michael Clarke Esq., Solicitor (middle), and Bill Wall. Interesting tidbit: Note the iPad in front of Mr. Clarke. This was running a Zoom meeting that allowed ZHB member Josephine Vlastaris to participate remotely.

Mr. Sander made a case suggesting that signage visible to the Newtown Bypass may not be necessary considering that the plan calls for reducing the berm along the Bypass allowing drivers to see the store and gas pump canopy.

Mr. Sander also asked if there were other Wawas that operated successful businesses with only 6 fueling stations instead of the 8 requested by the Provco for the Newtown Wawa. Mr. Redel answered with a simple, low-key “yes.”

ZHB member Paul Cohen asked “would you agree that there will be no temporary signs such as flags and lawn signs?” Mr. Redel agreed with the “caveat” that typically in the first 30 days of doing business that there may be banners and “that sort of thing.”

Listen to the following 6.5 minute audio snippet from the cross-examination of Mr. Redel:

Next: Hammond and the “Cone of Vision”

Michael Hammond, a licensed civil engineer in traffic and transportation, and EVP of Traffic Planning and Design (TPD) was up next. Recall that TPD submitted to the township a “Transportation Impact Study” (TIS) to the township, which showed that the proposed Wawa would result in a degradation of the intersection of Newtown-Yardley Road and the Bypass during weekday A.M. peak hours.

Mr. Hammond described his job: “when we talk about signage, my job is to make sure people that are not familiar with the facility can get to that facility in a safe and efficient manner.” In other words, he is a traffic engineer who was testimony was focused almost exclusively on signage. Personally, I’m not sure what one has to do with the other, but I invite you to listen to his testimony below. 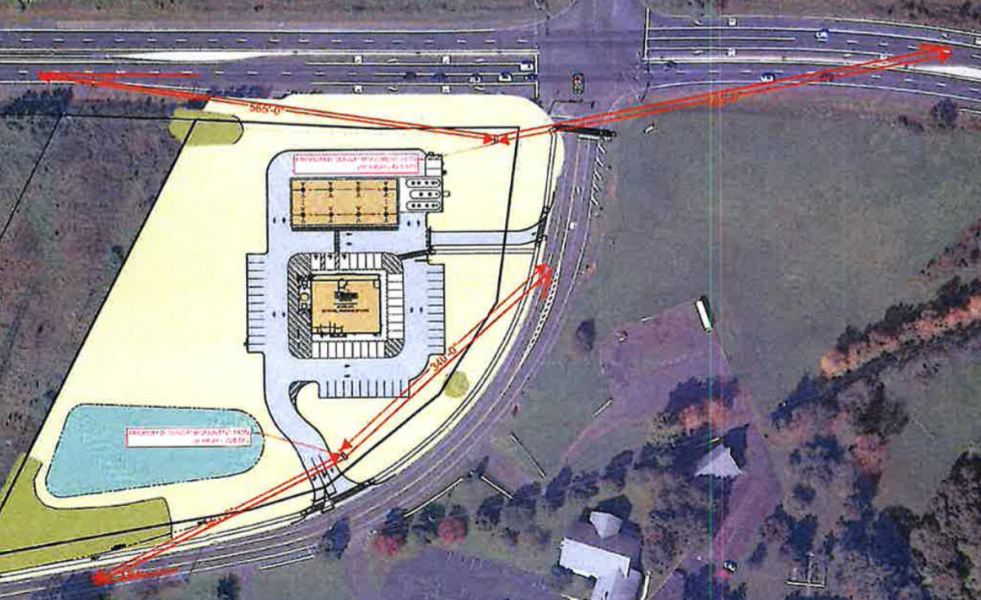 Figure 2: “Cones of Vision” presented by Mr. Hammond in his report. The points of origin of the cones are
at the “initial perception” distance; i.e., the first point at which the signs are visible.

In his testimony, Mr. Hammond talked about the “Cone of Vision” in determining the size and placement of signs (listen to following excerpt to understand what that is). Wawa’s application proposes one (1) 10' high freestanding monument sign on the Newtown Bypass. According to the evidence provided by TPD, “the square footage proposed for this sign is approximately 49.9 square feet per side, which is significantly less that the desired size of 121 square feet based on the posted speed along the Newtown Bypass.” In fact, Mr. Hammond suggests the optimal height of this sign should be 50 feet! According to his official report, however, the proposed heights of the freestanding monument signs are the minimum necessary in order to promote traffic safety along both the Newtown Bypass and Lower Silver Lake Road.

In his cross-examination, Mr. Sander continued to imply drivers on the Bypass and Lower Silver Lake Road would be able to clearly see the store and gas pump canopy and that therefore larger signs were not necessary. Mr. Hammond admitted that he did not consider this in his analysis.

Mr. Sander also asked if drivers on the Bypass would be able to see the proposed north-facing building sign (see Figure 3). Mr. Hammond could not say whether or not this would be possible. This could be a key argument against awarding signage variances since if that building sign is clearly visible – along with the fuel pump canopy – then drivers would easily recognize that this is a Wawa convenience store and gas station.

Figure 3: Street View of Proposed Wawa Looking West from the Newtown Bypass. This view was part of a Provco/Wawa Powerpoint presentation made at a 2018 Newtown Board of Supervisors public meeting. It is clear that with the planned  elimination of the berm along the Bypass and Lower Silver Lake Road, that the building sign and gas pump canopy are clearly visible from a sufficiently safe “initial perception” distance as shown in Figure 2. (See video below.)

At one point Provco/Wawa attorney John VanLuvanee made an interesting and telling aside. About 6 minutes into the above audio clip of Mr. Hammonds testimony, Mr. VanLuvanee says “assuming variances are needed for the signage…” During the cross-examination of Mr. Hammond, ZHB Solicitor Clarke referred to this when he said “the applicant made the argument that they don’t believe that the [sign] variances are required. I think they plan on arguing that at a later time, maybe in another venue.”

This suggests that even should the requested variances be allowed by the ZHB, Wawa is prepared to challenge the need for any variance in court! At that point in the hearing, I envisioned the future of the Bypass to be parallel to that of business Route 1 as many have predicted. For more on that, read “New Zoning Law Clears the Way for Wawa on the Newtown Bypass - What Message Does It Send Other Developers?”

The last Provco/Wawa witness was Michael W. Tantala who argued that the proposed electronic pricing sign was not an “Electronic Message Center” (EMS) as defined in the JMZO (see Figure 4). 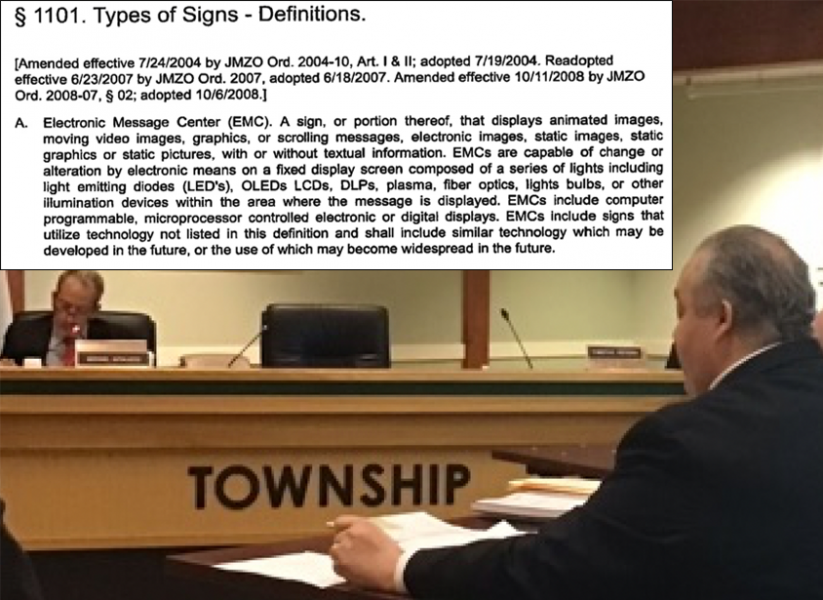 Mr. Tantala described the proposed pricing sign as having “plastic faces that are numbers that change internally through mechanical means.” Mr. Tantala avoids using the term “electronic” although the exhibit he offers is clearly labeled and “Electronic Price Display” (see Figure 5). 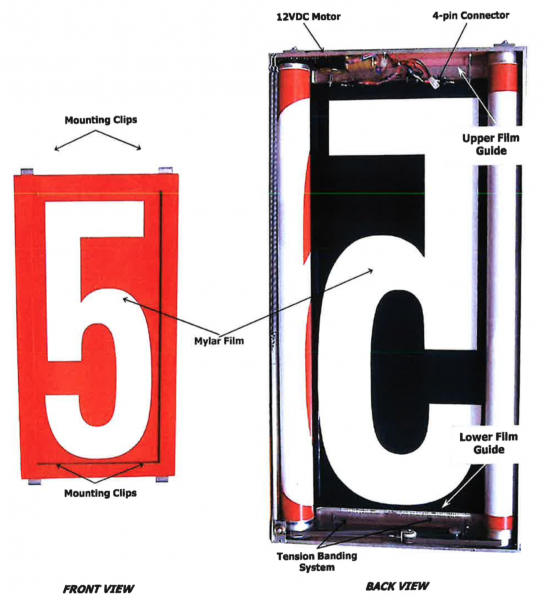 Figure 5: Proposed Pricing Sign Mechanism. This exhbit is reproduced from the “Skyline Products® Electronic Displays Installation Guide.” Note the use of the phrase “Electronic.” According to the Skyline brochure: “Skyline Scroll Signs are perfect for fuel retailers that are prevented from using LED signs by local city ordinances or stores that require a unique, branded sign that utilizes their distinct colors.”

Mr. Tantala claimed that the proposed price signs are not an “Electronic Message Centers” for two reasons: (1) they are not animated, and (2) the alteration is not by electronic means. Mr. Tantala, however, neglected to mention that the numbers are changed remotely via electronic means and NOT by an employee “mechanically” spooling the numbers by hand. Mr. Sander clarified that point in his cross-examination.

A considerable amount of time was spent regarding the definition of Electronic Message Center. A moment of comic relief came when Mr. Sander referred to the “Oxford comma” in the JMZO definition. I must admit that the significance of this was lost on me, but feel free to listen to the following audio clip and do your own interpretation.