Newtown Township Versus Wawa: Round 1, Signage 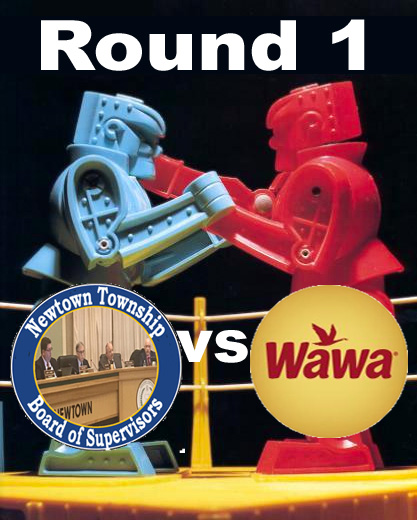 The hearing for Provco/Wawa’s requests for variances officially began at the May 6, 2021, meeting of the Newtown Zoning Hearing Board (ZHB). Township Solicitor David Sander, representing the Township supervisors, requested a continuance of the hearing to allow the township expert ample time to draft a report and prepare for the hearing. Thus, no evidence was taken and the hearing was continued at the June 3, 2021 ZHB meeting.

This is just “Round 1” of the hearing, which I review below. Round 2 was held at a special July 8, 2021, LIVE meeting. Listen to audio clips from that meeting: "Signage Part Deux".

Recall that the township supervisors voted unanimously to oppose Wawa’s requests seeking relief for eight fueling dispensers on 4.9 acres where six are permitted by right as well as various signage variances to display the Wawa logo and fuel prices. For more information about these requests for variances from the zoning, listen to this podcast: The Newtown Planning Commission Versus Wawa: Members opposed several requested zoning variances.

Provco also is asking the ZHB to permit two electronic message center signs (aka, monument signs) for the purpose of displaying fuel prices with the changeable copy being limited to fuel prices (see top of figure above). This is a variance from JMZO sections 1103.0.3 "General Sign Regulations; Illumination of Signs"; 1104.B.16 "Applicability; Prohibited Signs"; and 1106.N.1 "Permanent Sign Requirements; Electronic Message Center".

Electronic Message Center (EMC): A sign, or portion thereof, that displays animated images, moving video images, graphics, or scrolling messages, electronic images, static images, static graphics or static pictures, with or without textual information. EMCs are capable of change or alteration by electronic means on a fixed display screen composed of a series of lights including light emitting diodes (LED's), OLEDs LCDs, DLPs, plasma, fiber optics, lights bulbs, or other illumination devices within the area where the message is displayed. EMCs include computer programmable, microprocessor controlled electronic or digital displays. EMCs include signs that utilize technology not listed in this definition and shall include similar technology which may be developed in the future, or the use of which may become widespread in the future.

Attorney John VanLuvanne, representing Provco/Wawa, contends the display panel of the monument sign does not face the Bypass and if you look straight at it from the property line, what you see is the side view.

Facing or Not Facing the Bypass? That is the Question!

At one point, Mr. VanLuvanee mentions a “distinction in the ordinance between the limited access portion of the Bypass (which is where Wawa would be located) and the section of the Bypass that is not limited.” He made some kind of argument that this goes to the distinction in the ordinance between “facing” and “visible” to the Bypass. It was a confusing argument at best, but Mr. VanLuvanee promised to bring in other witnesses at the next meeting of the ZHB (Hearig, Round 2) to discuss the issue further. Stay tuned!

Download the 169-page transcript of this meeting (PDF file).