Top
Newtown Speaks Out on the Issues

Newtown Speaks Out on the Issues

As you may know, when I was running for Newtown Township Board of Supervisors, my team had a tag line: “Listening to you for a better Newtown!”

One way we listene to residents was through simple polls and surveys. I collected responses to a poll as part of my door-to-door canvassing (the Canvassing Poll). In addition, I hosted an online survey (the Online Survey), which asked slightly different questions. This article summarizes the results of this poll and survey.

When knocking on doors canvassing, all the candidates  on my team asked people to select one of the following as the most important local issue for them:

Nearly 300 responses wer collected. The summary of results are shown in the following pie chart:

Drugs, Taxes, and Development are the most important local issues according to the poll respondents. Respectively, 26%, 21%, and 21% of respondents chose those issues as most important for them. Keep in mind that the majority of these respondents are Democrats.

Although the Canvassing Poll does not allow the collection of comments, I often got a lot of feedback and comments from people. So, although the results may not be based on a “scientifically significant” sample, it was a great way to open up a conversation with residents and I learned a thing or two.

As of May 30, 2020, 344 people have responded to my online “Issues Affecting Newtown Survey,” which allowed respondents to rate the importance of each issue and to add comments as well as issues that are not included in the survey. The following bar chart is a summary of results: 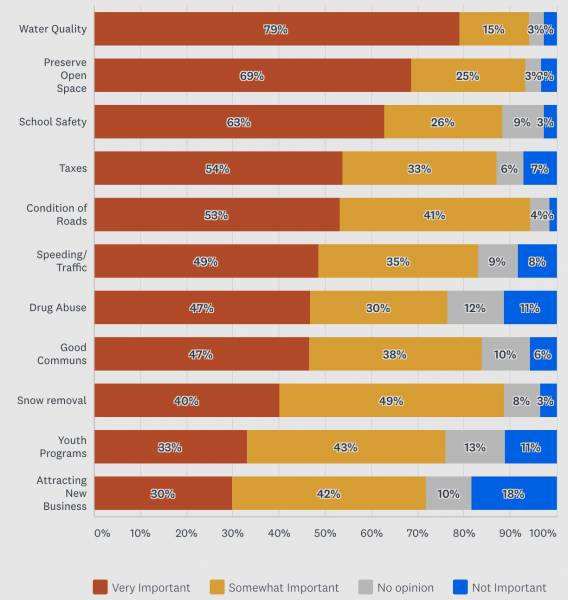 This survey asked opinions about some of the same issues as the Canvassing Poll, but also included other issues, several of which have been discussed at Newtown Board of Supervisors meetings. The survey was open to all regardless of political party affiliation.

It’s no surprise that 79% of respondents think that the “Quality of Drinking Water” is very important to them. This issue has been written about frequently in the local press. According to an article published in the July 16, 2017 issue of the Bucks County Courier Times, for example, "over the past several years, more that 16 public and 200 private wells...were found to be contaminated with high levels of PFOS and PFOA, which come from fire-fighting foams. The problem is national in scope... The contamination has reached drinking water supplies in states as diverse as New Jersey, New Hampshire, Colorado, and Washington." Also, after being petitioned by the Bristol Borough-based environmental nonprofit Delaware Riverkeeper Network, a Pennsylvania Department of Environmental Protection board unexpectedly voted to order a review of PFOA in drinking water.

Fracking is another source of drinking water contamination. Recently an ordinance was introduced to permit fracking in Newtown, Wrightstown and Upper Makefield.

Here are a couple of comments regarding this issue from Survey respondents:

The water quality is atrocious. It is at the maximum limits for all TDS and I have received letters periodically -after the fact- that the water failed for carcinogens.

The water report I saw is not ok. I bought my house 2 years ago from a young woman who was dying from a rare cancer. While it may not be related, it makes me uneasy. The neighbors tell me there has been a lot of cancer here.

I am not well informed about water management, but I feel that the quality (smell, taste, etc.) of the local water is poor, and is at the same time, very expensive.

Open space - including parks and trails - improves our quality of life, reduces stress on our resources and increases our home values.

Some comments from the Online Survey include:

Would love to see the township made more walkable, with more sidewalks and crosswalks connecting neighborhoods with shops.

We need more walking paths - including connections between those that already exist.

Many respondents to the Online Survey (47%) and a plurality of respondents to Canvassing Poll (26%) say the drug problem is their #1 concern. While canvassing, I’ve heard from at least a dozen people who know someone in their neighborhood who has overdosed on drugs or who has had a problem with opioids.

When the subject of drug abuse arises during canvassing, I tell people about my proposal for 24/7 drug drop-off box in Newtown (read “John Mack Proposes 24/7 Drug Drop-Off Box for Newtown Residents”). 70% of people who abuse prescription opioids get them from their friends or family. Safely disposing of unused and expired prescription medicines, therefore, is important to keeping them out of the wrong hands. Drug drop-off boxes can help achieve that.

One resident I spoke to wondered if security would be an issue.

That gave me an opportunity to point out that at the May 10, 2017, meeting of the Board of Supervisors, the purchase of a new video surveillance system was approved for an estimated cost of $38,140.48! According to the meeting minutes, “The new system will have more cameras throughout the complex which can be live stream viewed remotely in police cars or by the Chief or Township Manager. Video can be stored for 30 days.” Obviously, such a system would provide adequate security for a 24/7 drug drop-off box. If someone tried to break into one, the new security system would be sure to catch them in the act and lead to an arrest. I also mentioned my idea to ask KVK Tech - an opioid manufacturer located right here in the center of Newtown - to pay for the 24/7 box. I am sure they have experts who would be able to advise the town of the necessary security required. After all, they store these dangerous drugs at their facility on Terry Drive one block down the road from the post office!

Some comments from respondents:

Drug abuse attention should include helping those with the addiction not just law enforcement aspect of the problem.

Heroine (sic) abuse and deaths plague not just this town but this county. Arresting a victim of this drug is senseless (sic). I would like to see more awareness and education about this poison that is on our streets.

I agree with these commentators and have called for the Board of Supervisors to establish a non-partisan “Drug Free Newtown” committee and appoint knowledgeable volunteers from the community to serve on it. The committee should be tasked with recommending other solutions to this crisis and spearheading a drive to solicit donations from local businesses, including KVK Tech.

Taxes was a top 3 issue of importance to respondents to the Canvassing Poll and ranked 4th among 11 issues in the Online Survey. A majority (54%) of respondents to the Online Survey thought that taxes was the most important issue for them. But some respondents weren't so concerend about taxes. As one respondent put it,  “Of course no one likes paying taxes, but so long as the services they pay for are desirable and clear to see, they are worth it. Progressive Taxes are the basis of a civilized society.”

I view taxes as the total package coming out of my retirement fund which goes to any/all government agencies. Reduction at the federal level which forces increases at the state or local level results in the same thing: a tax increase. This is unacceptable, and could very well force people to move out of this area.