Top
Newtown Board of Supervisors Shoots Down Drive-thru Starbucks

Newtown Board of Supervisors Shoots Down Drive-thru Starbucks

Despite a recommendation for approval of a “conditional use” application for a drive-thru Starbucks cafe by the Newtown Planning Commission, the Newtown Board of Supervisors (BOS) voted 5-0 against the application at the May 9, 2018, public meeting. The cafe is proposed to be located in the Village at Newtown West at 2896 South Eagle Road - in the entrance to the McCaffrey Supermarket parking lot.

Here's the proposed plan that was presented before the Board. The Starbucks building is shown as "Cafe" and the drive through lane is between the "Cafe" and South Eagle. 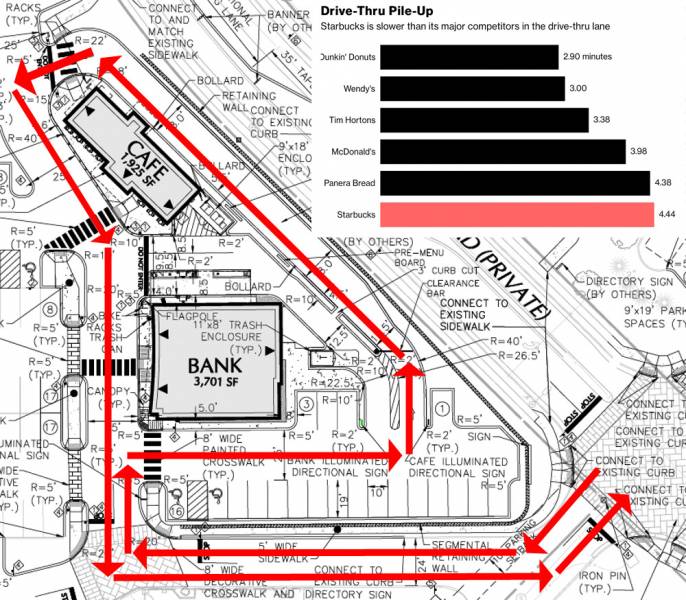 I've indicated the path that traffic to and from South Eagle Road would have to take to get in line for a Triple Mocha Frappuccino® or just a plain old Cold Foam Cascara Cold Brew. No wonder Starbucks is "slower than its major competitors in the drive-thru lane" - it takes on average 4.4 minutes to get your order.

Bloomberg says: "Starbucks is still pokey in the drive-thru, and will have to speed things up if it wants to compete with the likes of Dunkin’ Brands Group Inc. and McDonald’s Corp. Getting it right could make or break the strategy that the Seattle-based company is counting on to jump start sales after revenue disappointed analysts in eight of the past nine quarters."

Chairman Calabro commented on the potential traffic problem and Supervisor Kyle Davis said the developer is trying to stuff too many stores into the space. Note that there is also a drive-thru bank located in the same area. I can imagine cars lined up to get access to the drive-thru lanes of the bank and Starbucks. I commented upon the dearth of allotted parking spaces.

Newtown resident Kierstyn Piotrowski Zolfo commented on Facebook: "Agreed that the location for that Starbucks would have been a traffic nightmare, and the number of parking spaces sounded altogether inadequate... especially for a Starbucks, where some people will come and stay for hours. But you do not know they joy that the words "drive . thru . Starbucks" briefly brought into my heart last night... I hope that there is some place in town where such a drive-thru could be opened without the same type of traffic difficulties."

Kierstyn balanced that against the fact that at the same meeting the BOS passed a resolution sponsored by Fair Districts in support of a Citizens' Commission for Legislative and Congressional Redistricting.

UPDATE (June 22, 2018): Starbucks goes to court to contest the Board's decision; says the Board committed an "abuse of discretion"; i.e. Failed to take into proper consideration the facts and law relating to the application. Newtown Township says: "The Board of Supervisors neither abused its discretion nor committed an error of law by denying the application."

Starbucks Takes Newtown Township to Court Contending that Township Vote Against Drive-thru Store in Shopping Center was "Arbitrary, Capricious, an Abuse of Discretion and Contrary to Law"