Details of the application for a Wawa at the southwestern corner of Newtown Bypass and Lower Silver Lake Road were presented at a Work Session meeting of the Newtown Board of Supervisors (BOS) on Monday, May 14, 2018. No decisions are made at BOS Work Sessions.

Michael Cooley of the Provco Group, which was hired by the owners – Innovative Hospitality Management – to develop the site, presented sketches and concept images of how the Wawa Superstore would be laid out and look to drivers (see below). 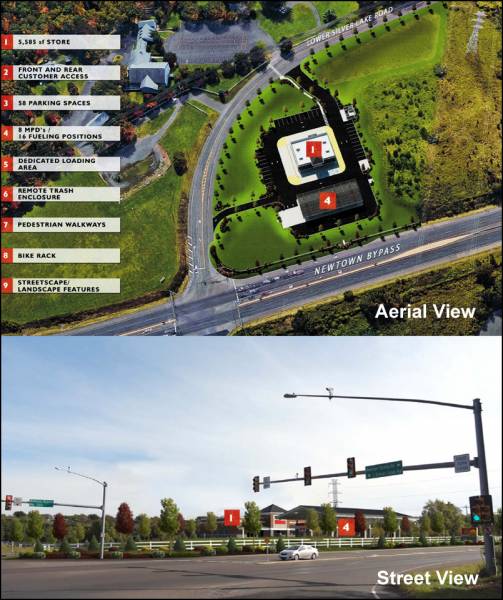 One major stumbling block is the fact that the site is within the Office Research (OR Definition) zoning district, which does not allow retail stores or the selling of gasoline according to a memorandum prepared by CKS Engineers.

According to Article III, paragraph 300, of the Newtown Area Zoning Jointure (JMZO Definition), an OR zone is specifically intended to “provide for special office and research, industrially related uses on large tracts of land, which will provide a major employment center for the Region while enhancing its open space characteristics and natural features.”

It should be noted that employment centers envisioned by the OR zone could generate significant Earned Income Tax revenue for the Township. Retail stores, such as Wawa, that pay a wage of $10 per hour to a minimal number of employees, do not provide any significant tax income for the Township.

“This site is never going to be a corporate headquarters or office building,” claimed land use and zoning law attorney John VanLuvanne in remarks to the BOS. Therefore, Mr. VanLuvanne proposed to amend the OR ordinance to allow as a special condition the use of the site for a Super Wawa type convenience store with fuel pumps. Supervisor Mack questioned Mr. VanLuvanne on this issue and asked what, if anything, would be the financial benefit to Newtown.

If the ordinance is not amended, the developers would have to seek at least 10 “variances” from the Zoning Hearing Board, including:

Another issue discussed at length was the increased traffic that a Super Wawa would bring. According to the traffic engineer hired by the developer, it is estimated that approximately 2,000 vehicles would visit the store in a 24-hour period. He suggested that of these, only 500 vehicles would be added to the Bypass traffic as a result. Mr. VanLuvanee said a traffic study would be submitted to the Supervisors and available to the public in the "interim" during the process of amensing the OR ordinance.

There was concern about the 400 feet of frontage (see “Street View” in the photo above) and its impact on the “rural” nature of the Bypass. Supervisor Phil Calabro, for example, noted that the Bucks County Planning Commission recommended that “the locations of the building and the fuel pumps/canopy be flipped so that the building is situated closer to the Bypass… The canopy could be positioned with the shorter end toward the Bypass to minimize the visual impact of its mass.”

“The simple answer,” said Mr. Cooley, “is that it is not in Wawa’s business model to have pumps located behind the convenience store off of the main road.” Although Mr. Calabro tried to make a case of it being “six of one, half a dozen of the other,” it is obvious that Wawa wants the gas pumps to be as visible as possible to the maximum number or passing cars. “That’s why the gas pumps are located where they are, so that when you are traveling down the Bypass you can see that the Wawa has the gas offering,” said Mr. Cooley. This, of course, would alter the “natural features” and rural feel of the Bypass.

Several members of the public made comments. I will have more to say about this in a future post.