The following is a brief summary of the August 8, 2018, Newtown Board of Supervisors (BOS) meeting based upon the official minutes and online video of that meeting, which you can find here.

Planning Commission: Allen Fidler, Chairman, gave a synopsis of the August 7, 2018 meeting regarding the Arcadia Green tentative PRD #3.  There were no formal recommendations made. Some of the concerns of the Commission and from public comment were traffic and pedestrian safety issues, proposed double left u‐turns at Mill Pond and Buck, development infill affecting quality of life, and roadway safety accessing and leaving their developments via Buck Road and the Bypass. Suggestions from the Commission included a pedestrian bridge, a second access to the development for use by EMS services only, and for partial open space to remain as undisturbed habitat for native plants and wildlife.

Arcadia Green - Tentative PRD Hearing, Part 1: Jason Duckworth, President of Arcadia Land Company, and Attorney John VanLuvanee, presented the plan and testified. Resident Jay McGuigan, 271 High Street, Newtown Crossing, was given party status. Resident and vice president of Eagle Ridge Association Dennis Schoener, 21 Ardsley Court, Eagle Ridge, was denied party status; however, if an attorney is hired by Eagle Ridge, they may have the opportunity to be included. Mr. VanLuvanee presented the Supervisors with a binder of exhibits and addressed the history of the property and previous plans. Mr. VanLuvanee explained an offer of a mediation option for the Board to consider. Mr. Calabro asked for a motion to submit the application to mediation. The motion failed.

[In response to VanLuvanee’s request that several Supervisors be recused due to bias, Township Solicitor, Dave Sander, cited section 603 of the PA Second Class Township Code, which states: “A member of the board shall not be disqualified from voting on any issue before the board solely because the member had previously expressed an opinion on the issue in either an official or unofficial capacity.”] A motion to recuse the Board members was denied.

Transcript of the Hearing.

Part 2 of the hearing will be held at the August 22, 2018, Board of Supervisors meeting.

Swearing in of New Supervisor: Mr. Dennis Fisher was sworn in as a Supervisor by District Judge Mick Petrucci. 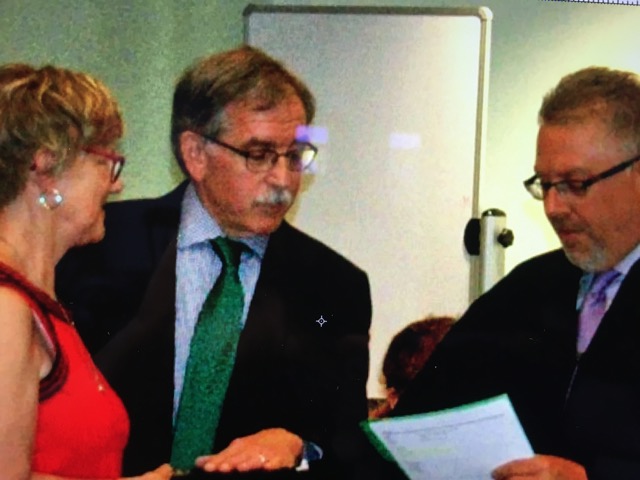