The following is a brief summary of the November 28, 2018, Newtown Board of Supervisors (BOS Definition) meeting based upon the official minutes of that meeting, which you can find here. See how Supervisors voted on motions (click here).

Environmental Advisory Council - Year of the Bird Proclamation: Newtown Township has been a designated bird town community for many years, regularly sponsoring events to promote conservation. In 2019 the EAC and Pennsylvania Audubon’s Society will be jointly developing and implementing a new program promoting the use of native plants to support bird population. This proclamation states that 2018 is the hundredth anniversary of the signing of the Federal Migratory Bird Treaty Act, protecting migratory birds for many decades.

Finance Committee: Mr. Fisher reported on behalf of the Township Finance Committee. He spoke of the DCED presentation lead by Andrew Sheaf that was given at the Board of Supervisors Work Session Definition on November 19, 2018. He reports that Mr. Sheaf provided him a detailed document after his presentation, and that after reviewing he feels positively about the Township benefiting from this program.

Technology Committee: Mr. Mack shared a discussion of the Nixle Emergency Notification System, which the Committee recommends the Township subscribe to [for more on that, read "Does Newtown Need a Mobile-Enabled Emergency Notification System?"]. Google Analytics Reports on the Township website was discussed. Josephine Vlastaris, Chair of the Technology Committee, recommended using this program to monitor website activity. The Committee also suggested reducing meetings to take place quarterly, beginning with last Tuesday in March.

Anti‐Discrimination Ordinance: Mr. Sander presented the advertised Anti‐Discrimination Ordinance Definition to be adopted by the Board of Supervisors. Ordinance is to enact a Newtown Township Human Relations Commission, and provide protection based on all categories presently protected by the State Human Relations Act, in addition to persons on basis of sexual orientation, gender identity and gender expression.

Motion to approve Anti‐Discrimination Ordinance made by Mr. Mack. Motion was seconded by Ms. Bobrin.

Ms. Bobrin questioned an exclusion in the ordinance, which Mr. Sander plans to look into. Approval granted subject to potential removal or revision to the definition of “employer” stated in Ordinance. Motion and second motion were revised to account for this. Two minor revisions to this Ordinance were also noted. Clarification that a complainant could appear before Human Relations Commission with or without an attorney, and changing effective date from December 3, 2018, to become effective immediately upon the appointment of Human Relations Commission. Also, a training provision was noted for this Commission.

"Pennsylvania is the only state in the northeastern U.S. that does not have a law explicitly prohibiting discrimination on the basis of sexual orientation. It is my hope that this action sends a signal to the PA state legislature that it is time to pass legislation to protect the rights of all citizens in the Commonwealth regardless of sexual orientation or perceived gender. Today, the federal government is attempting to take away the rights of “transgender” citizens. Which group will be next? There’s no telling where it will end if we stand by and do nothing."]

Nixle Emergency Notification System: Mr. Mack made a request for adding a line item expenditure to the 2019 budget in the amount of $6,000 for a yearly subscription to the Nixle Emergency Notification System and gave reasons the Township could benefit from this service. There was discussion about this suggestion. Due to desire for additional discussion and information, Mr. Calabro made a motion to table. Ms. Bobrin seconded this table. Motion was tabled 3‐1 [Mr. Mack voting "nay"]. 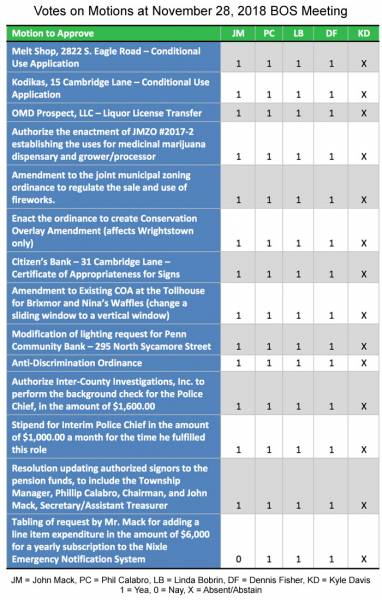