Police Chief John Hearn presented the Calls Report for April 2019 at the May 8, 2019, Board of Supervisors (BOS) meeting. In April, the Newtown Police Department responded to 1,686 total calls, 300 (18%) of which were in Wrightstown Township (Newtown Police provides services to both Newtown Township and Wrightstown). See a summary of the report below. Note: Not all calls are listed. 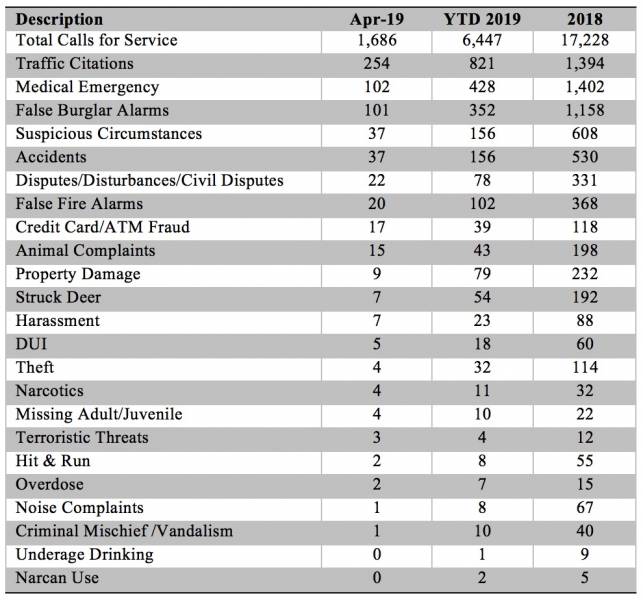 At the meeting, Supervisor Mack noted that the Tyler State Park swastika graffiti incident made it to ABC News (read Investigators Seek Person Who Painted Swastikas Along Tyler State Park Trail in Newtown) and that "anti-Semitic behavior is on the rise across Pennsylvania." He asked if the Newtown Police Department thinks it is prudent to have some kind of presence at synagogues and other places of worship.

The Chief first noted that the swastika was written in chalk on a section of walkway in the Northampton section of Tyler Park and that the State Police were responsible for investigating the incident. He also informed the public that there have been no reported hate crimes in Newtown Township in the last three years.

As for the thirteen religious institutions in the Township, the Chief assured the public that the police have been present during Passover and Easter and at different times on weekends when services are held. There will continue to be periodic checks and if there are any concerns or questions, religious leaders can reach out to the department.

Meanwhile, according to the Police Log for the week of April 5 through April 11, 2019, on April 5, 2019, a “Newtown Township resident responded to headquarters to file a report regarding criminal mischief to a construction site in the Village of Newtown Shopping Center. According to the complainant, the night prior she saw the word ‘Hitler’ and a swastika on an orange plastic barrier that had white paint sprayed over it but was still visible. The complainant stated that her friend went and spoke with the foreman at the site, and the foreman turned the barrier around so it was not facing the public.”

Crack Down on Aggressive Driving Continued in April

Eagle Road Gets Most Speeding Citations

During the crack down on aggressive driving in March and April, 2019, Newtown Township Police issued substantially more speeding citations on Swamp Road than during previous months. But in April the focus seemed to shift to Eagle Road, which surpassed Swamp Road in the number of speeding citations issued. See the chart below.

Recently, PennDOT notified Newtown Township that the speed limit on Swamp Road between the Twining Bridge intersection and the intersection of Pennswood Dr. (entrance to Knob Hill) will be reduced to 40 MPH from 45 MPH. That was a direct result of a September 12, 2018, BOS public meeting where representatives of PennDOT answered questions and concerns about speeding on Swamp Road from Newtown residents and Supervisors (view the video: “PennDOT Addresses Swamp Road Issues”).

PennDOT to Lower Speed Limit on Section of Swamp Road