Top
Let's Make Sure Racism Has No Place in Newtown!

Let's Make Sure Racism Has No Place in Newtown!

Yesterday, June 2, 2020, an white male smiled as he assaulted a 22-yo woman #BlacklivesMatter protester outside Starbucks in Newtown Borough. The Intelligencer reported that the woman was of "Asian descent." The photos below show him before and after the attack, which knocked the young woman’s phone to the ground.

The mother of the victim said in her Facebook post, “I can’t express how frustrated I feel today after an incident happened with my 22 yrs old daughter and 18 yrs old son when they wanted to educate people in Newtown very peacefully by putting flyers on street regarding George Floyd’s death and one white couple was there and yelled at them and tried to hit my daughter and cracked her phone by dropping on the floor.”

She was being nice. He not only “tried,” he actually did strike her hand holding the phone. It’s very clear this is what happened from the video and from eyewitnesses at the scene. The Newtown Borough Police were there and I am waiting to see the police report.

Is This a Racist Incident?

The mom ended her post with these words: “Do you think this white couple will do the same thing with white kids if they were putting the same posters? I really think people have to drastically change their thinking and support humanity, not racism.”

Regardless if you believe this assault had racial undertones or not, Newtown residents should be aware of racial issues right here in town and change their thinking about racism and do more to prevent it. That is the goal of the Newtown Township Human Relations Commission (NTHRC), which plans to put racism front and center at its June 17th Zoom meeting on racism (more about that below). Below are some comments I have received from people who have registered to attend this meeting:

“As a Black female living in this community, I remain frightened for my husband, son, father as well as my daughters and myself. I'm interested to hear firsthand how these issues are being addressed in our community.”

“We are part of the 2% of African Americans living in Newtown/Richboro and are deeply impacted by the recent events and overall racism that we and other black families have experienced here in Newtown. We would like to see the Committee urge the Newtown Police Department to release a statement reassuring its black residents that they are safe and all will be treated equally.”

“We are the only black family in our development, and one of a hand full in the area. I want to make sure that this area has processes, programs, resources available so that my family can live here safely. One of my children was being picked on in first grade. My husband is a black man who runs, bikes, etc in the area and we need to feel safe.”

“As an African-American woman who was a child during the 1960s, came of age during the 1970s. I've experienced and still experience racism, discrimination, bigotry and prejudice in a variety of ways and am still learning insights to all the detailed intricate and less obvious aspects of microaggresions, unconscious bias and systemic racism.”

“Because I’ve been calling out these systemic issues within policing for nearly 2 decades only to be harassed by the very people I’m calling out because they are the law. Harassed by those that are supposed to protect and serve. Who will police the police? I have been especially concerned about the clear prejudices of certain officers, and the complete lack of diversity within the Newtown PD. The time has come to hold them accountable for everything, even the smallest of infractions.”

“I want to help to eradicate racism in our community and our country.  I have friends and family from all different backgrounds and with all different skin colors, and right now I fear for their safety.   I'm a white woman, and my husband is Arab and identifies as brown.  I worry for him and our 2 children and how they will be treated, because of their names or how they look.  Our country is supposed to stand for freedom and hope for everyone and I want to be sure I a doing my part to help achieve those ambitious goals.”

“I am an African American female who was born and raised in Bensalem. Racism is no stranger to me, but it has helped to make me the strong woman I am today, determined to get involved to make a change!”

Get Involved, Make A Change

Just a few days prior to this incident, the NTHRC decided to dedicate its Wednesday, June 17, 2020, 7 PM, Zoom public meeting to discussing racism and what can be done to ensure that racism has no place in Newtown and that incidents such as the above are not tolerated. All members of the public will be able to attend and participate in this meeting.

Please complete this registration form if you are interested in attending this meeting.

The information you provide will be useful to aid the discussion and you will receive my personal invitation with the meeting ID and password and/or link via the email address you provide. 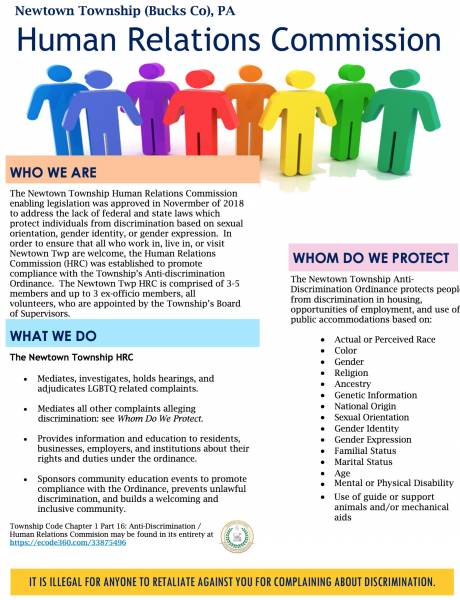