The following is a brief summary of the July 8, 2020, Newtown Township Board of Supervisors (BOS Definition) Zoom meeting based upon the official minutes of that meeting, which you can find here. You also can view the video archive here.

Engineer's Report: 2020 Liquid Fuels Road Program Re-Bid – Bid Award Ms. Colubriale reported three bids were received on June 18 and after discussion with Township staff it was decided to complete the work included under the base bid and alternate bids 7, 8, and 9. The alternate bids were selected due to the ongoing sewer authority work that is affecting the roadways of alternate bids 1, 2, 3, and 4. The total is roughly 2.8 township miles and the low bidder for the combination of Base Bid and Alternates, is James D. Morrissey, Inc.

Mr. Mack added that Commonwealth Drive is not on the list but asked if it was a candidate to be patched with the new milling machine. Mr. Lewis said he is aware of the situation but has no available work force at this time due to having no summer hires and he will have addressed as soon as he is able. Mr. Davis also encouraged caring for this roadway as he has seen it and confirms it is bad. Mr. Lewis said it will be on the list for next year’s road program and will be patched in the interim.

When will construction begin?

Ordinaarily, road construction would have aready begun and near completion by now (August), but because of COVID-19 tax shortfalls, tax revenue earmarked for roadwork was diverted to cover general expenses and the original bids had to be rejected and the process restarted, which delayed things. A recent Engineer's report notes that a "pre-construction" meeting with the contractor was held on August 6, 2020. I assume that a schedule was decided upon at that meeting and that the Township will reveal the schedule to the public before or at the August 26, 2020, BOS public meeting.

Police Report: Chief Hearn reported there were 1,541 calls for service during June including 14 arrests, 8 DUI’s, 45 traffic accidents and 123 traffic citations. The Chief reported two major deployments of resources, one on June 4 to the Garden of Reflection for a vigil and on June 6 for a protest at Washington and Sycamore and both events were peaceful and held without incident. He said there will be a town hall on July 23 from 7:00 to 8:30pm in the Township building where the community will be able to ask questions of the Chief and some officers in an effort to promote dialogue between the police and the community.

[You can read a summary of the July 23, 2020, Police Town Hall meeting in the August issue of Newtown News Update.] 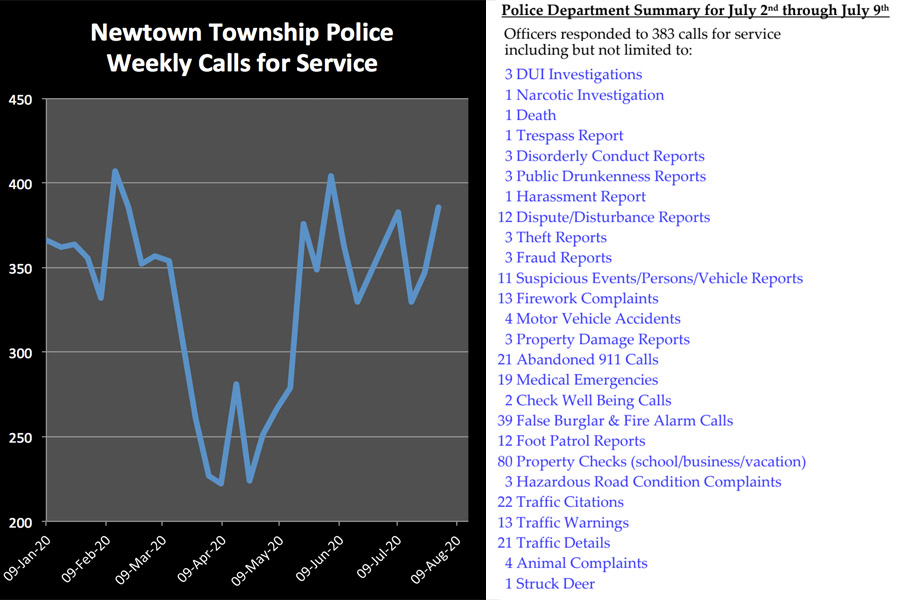 Referring to the Newtown Shopping Center application, Mr. Mack questioned if it was the norm to have two applications in one. Mr. Sander replied it is not unusual when a property is owned by one entity and proposes various improvements to some but not all the property to include all relief requested in one application. Mr. Mack said he sees the need for Chick-fil-A improvements but has concern over the Old Navy in Newtown [read "Survey Says Newtown Area Residents Oppose Old Navy Box Store"].

Calabro on Save Outdoor Dining: Mr. Calabro said as businesses begin to expand their services, they must understand the safety regulations they have to adhere to. He added there are rules and regulations that go with protecting the public and said it is important to protect outside diners with barriers.

Mack Opens Up Discussion on E-30 Ordinance: Mr. Mack reported at the Joint Zoning Council meeting the E-30 amendment for the combination convenience store/gas station was finalized. He asked when the final document will be distributed to the BOS for each township and what the timeline and next steps are for the E-30.

Mr. Sander said we are ahead of schedule as the actual ordinance must be acted on in October; once in final form it must go to the Bucks County Planning Commission (BCPC) for a 30 day review. Mr. Sander said now that there is an ordinance that is generally agreeable to all in the Jointure, there should be a discussion with Provco to see if there are any other agreements needed. Mr. Mack inquired which comes first, the BCPC or the Provco review and Mr. Sander replied probably Provco as the ordinance should be as close to final as possible when submitted to the BCPC. Mr. Calabro said Provco does not run the Township and should not have a say before the BOS does. The discussion ensued.

Mr. Sander explained that Provco filed the challenge before the municipal cure and based on current law and uses in Hatboro and Plumsteadville, the court decisions are not in our favor. However, he said if the majority of the BOS is of the opinion to move forward, it is within their right and means to do so; he added there is a risk if engagement with Provco is stopped as they will likely pursue their challenge. Mr. Calabro said the BOS is trying to pass this for the betterment of the Township and added we have shown good faith in this ordinance and need to show backbone against Provco. Mr. Mack agreed with Mr. Calabro and said we are getting closer to what Provco originally proposed. Mr. Calabro’s opinion is to move on to the BCPC for review and he polled the rest of the Board to determine if there was consensus to add this item to the next agenda. There was consensus to move forward.

Oxley on EDC: Mr. Oxley reported he attended the EDC (Economic Development Committee) meeting where short-term strategies for supporting local businesses were discussed along with how to design a way to keep more money in Newtown and talk to other business owners about bringing their businesses into Newtown Township. He also met with Chief Hearn and Mr. Mack to discuss the town hall meeting.

Mr. Calabro asked if anything was discussed at the EDC meeting on the guidelines or duties they should be performing. Mr. Oxley said it was not brought up as the majority of conversation was around how we can market Newtown better long term; he said he didn’t get into in detail, but all on the EDC understand the direction expected.

Fisher on Econsult Surveys: Mr. Fisher reminded all that Econsult has sent out surveys to the Business Commons and the NBA and he encourages all to take the survey; there is also citizens survey on the Township website. Mr. Mack said the surveys were sent out late and have a deadline of July 9 which doesn’t give much opportunity for a response and he asked if the deadline could be extended. He also said the survey should be for all businesses in Newtown and added most of the NBA businesses are not located in the Township and asked if there could be a wider business distribution area. Mr. Calabro asked Mr. Oxley to follow up on the business survey and Mr. Lewis said he spoke to Econsult about extending the deadline of the survey.