At the November 22, 2022, Newtown Board of Supervisors (BOS) meeting, the supervisors approved and authorized the execution of a fee agreement to hire David C Babbitt and Associates LLC to assist the township in its defense against Provco Pinegood Newtown, LLC 's [Wawa’s] Substantive Validity Challenge (SVC) to the joint Municipal Zoning Ordinance (JMZO). The agreement and fees were laid out in a letter dated November 13 2022.

Wawa first filed its SVC several years ago (on October 16, 2019) and held it in abeyance UNTIL the BOS denied its plan to build a combination gas station and convenience store on Newtown Bypass at the October 26, 2022 BOS meeting. Provco has asked that its SVC be moved forward for a Zoning Hearing Board (ZHB) hearing. The schedule is not yet known, but an extension has been granted through February 28, 2023.

Provco also intends to appeal the township’s denial of its land development plan at the court level. Meanwhile the township is already in court with Provco over a zoning board decision to deny variances for the number of gas pumps and for signage (for more on that, read “Newtown Twp vs Wawa: Round 3, Newtown's Expert Testifies” and citations within).

In order to assist the township, David Sander, the Township Solicitor, contacted Mr. Babbitt – “our go-to planner,” said Sander – who assisted the Township in fighting the variances for additional pumps and signs facing the Bypass (read “Newtown Twp vs Wawa: Round 3, Newtown's Expert Testifies”). Mr. Babbitt is therefore familiar with the site and, in Mr. Sander’s opinion, has the expertise necessary to review the substantive validity challenge and the ordinance and to testify in favor of the township.

What’s The Basis for Provco’s Claim?

Basically, Provco/Wawa is claiming that the provisions of the JMZO prior to the “Municipal Cure” that created an E30 use, which allows for a combination gas station and convenience store (e.g., Wawa Superstore), was “arbitrary, and unreasonable, and has no substantial relationship to promoting its public health, safety, and welfare.” Property owners* frequently challenge the substantive validity of ordinances they feel are too conﬁscatory (i.e., a right taken away by government).

Thus, one could consider the Substantive Validity Challenge as a sword held over the heads of supervisors in an attempt to intimidate them to accept Wawa’s plan whether or not that plan was in compliance with the E30 ordinance. It didn’t work, so now the fate of the plan is up to the quasi-judicial ZHB and ultimately, perhaps, to the courts**.

*It should be noted that Wawa stays above the legal fray because it does NOT own the property in question. The property (parcel 29-010-042) is owned by Provco Pinegood Newtown, LLC (deed date: January 12, 2022). Wawa pays RENT to the property owner to have its store located there. I am sure it also pays to construct the facility according to its plans, but it stays out of court and let’s the property owned fight its battles in the public domain.

What Does It Gain Them?

What does it gain them if they are successful at the Zoning Hearing Board or ultimately on appeal through the court system? 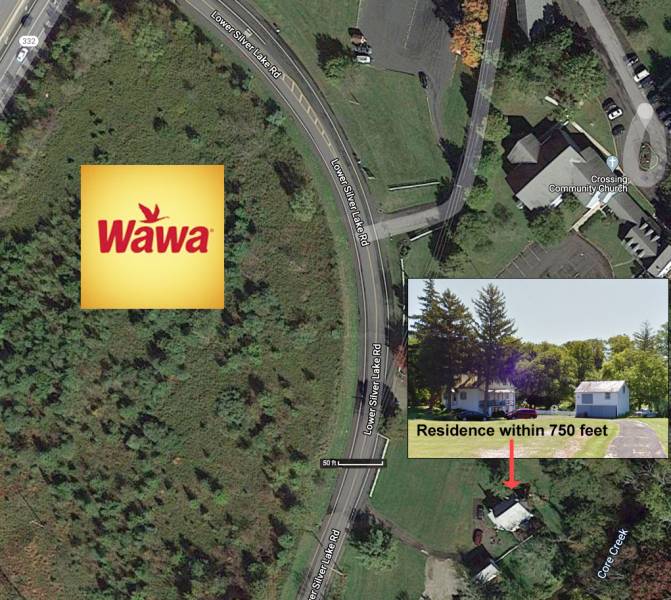 According to Mr. Sander, “they will have the ability to develop their property as they wish with a convenience store and gas station without having to comply with the provisions of the E30 ordinance.”

One of those provisions that I mentioned at the October 26, 2022, meeting is Item #30 of Section 7 of the E30 ordinance, which states “The Board of Supervisors may limit the hours of operation if a residential use [emphasis added] is located within 750 feet of the subject property line.”

Since there is clearly "residential use" within 750 feet of the proposed Wawa site (see figure at left), I believe that the BOS can set a limit the hours of operation.

Clearly, enforcing item #30 is in jeopardy. But I even if the BOS approved Provco’s plan with the provision that the hours of operation should be limited to say between 5 AM and midnight, I believe Provco would fight that as well and eventually win.

The “Cleanest Plan I’ve Ever Seen”

That I believe is the only gain, because at the October 26, 2022, BOS meeting, Mr. John VanLuvanee – the lawyer representing Provco – made it clear that the plan it submitted was Provco’s best plan and they had no intention of making changes to it.

At that meeting, Mr. VanLuvanee said “tonight I'm happy to say that we're here with a plan that I believe is probably the cleanest plan that I've ever seen or ever experienced one of my clients produce in the course of the 50 years that I've been practicing.” See video of the meeting starting at this point.

After this statement, I envisioned Mr. VanLuvanee dropping his mic to the floor and walking off stage. What more could be said?

**P.S. Should the ZHB deny Provco’s Substantive Validity Challenge, it is certain that this decision will be appealed all the way up the State Supreme Court, if necessary. But will the Township throw in the towel way before then?