No New Tax Hike Does Not Indicate a Stable Local Economy

According to an analysis prublished in the Bucks County Courier Times this morning, more than half of Bucks towns will not raise taxes in 2018. However, that does not mean that these towns will not face a financial crisis down the road (see clip below). File this under "Don't ever believe a politician who says 'Read my lips. No new taxes!' or the equivalent." 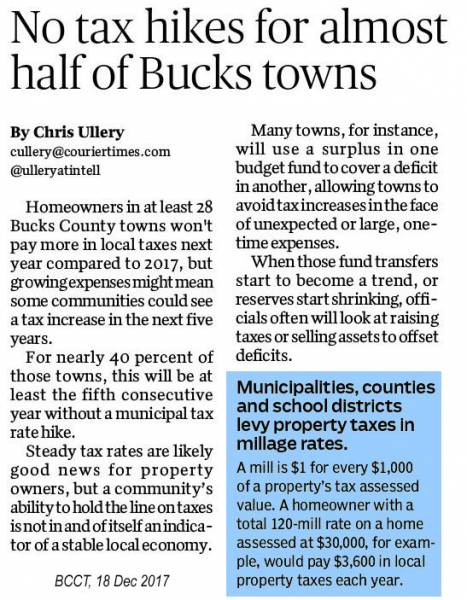 Newtown Township may soon be added to the list. At a contentious public meeting on December 13, 2017, the Board of Supervisors debated whether to cut spending for essential services (again) or to approve the 2018 budget with new taxes to pay for Emergency Medical Services and Fire Hydrant Maintenance. In the end, they were unable to reach a consensus. Read "Newtown's Looming 2018 Budget Crisis."

According to the BCCT, perhaps a quarter of Bucks County towns have not seen a tax increase since 2013 (see the following table).

Note that Newtown Twp raised taxes by 1 mill in 2017 for debt service, which allowed the Township to borrow $1 million for roadway improvement every three years. If another tax increase is necessary down the road, at least that road is likely to be in good condition!