The following is a brief summary of the March 11, 2020, Newtown Township Board of Supervisors (BOS Definition) meeting based upon the official minutes of that meeting, which you can find here. In attendance and voting were Supervisors: Chairman Phillip Calabro, Vice Chairman Dennis Fisher, Secretary John Mack, member David Oxley, and member Kyle Davis. Also in attendance were: Township Manager Micah Lewis and Township Solicitor David Sander.

Love is Love Day Resolution: [The Newtown Township Board of Supervisors (BOS) passed a "Love is Love" resolution in support of LGBTQ + minority youth by a unanimous bipartisan 5-0 vote. Joining me in voting in favor of the resolution, which I authored and put forward, were Board members David Oxley, Phil Calabro, Kyle Davis, and Dennis Fisher.] [For background read: “The Day That Newtown Township Failed to Show Love for LGBTQ+ Youth”]

Marlene Pray, director and founder of the Planned Parenthood Rainbow Room in Doylestown provided statistics on LGBTQ youth and described the first ever county wide prom; she said the original request was to recognize love is love on 2/15/20 and the goal of the resolution was to surprise the prom committee at the prom where over 150 youth from 57 different schools attended. Ms. Pray confirmed the date was never about Valentine’s Day saying although Valentine’s Day is often difficult, the “love is love” phrase is what matters to the queer community. She quoted a speech from Lin-Manuel Miranda and asked the BOS to vote to support the love is love resolution.

Linda Bobrin, resident and former member of the BOS, asked the Board to recall all the good things they accomplished over the last few years and urged them to reconsider the adoption of the Love is Love resolution.

Tracey Sabara, resident of Warminster, shared the joy and challenges of parenting her 13-year-old transgender son. She expressed her confusion as to why there has been so much pushback to something as simple as recognizing that love is love and asked the BOS to support and put the resolution into action.

State Senator Steve Santarsiero acknowledged that Newtown was the first Township in Bucks County to pass the Civil Rights Ordinance that grants civil rights to the LGBTQ community in Newtown. He then explained the purpose of the Love is Love resolution was to recognize the LGBTQ youth, their first queer prom and how much it meant to these kids. He addressed the concerns of some who felt the resolution was exclusionary stating that could not be further from the truth and asked the Board to acknowledge this one special day for these kids and make a statement to stand with these courageous young people. Senator Santarsiero urged the BOS to bring the resolution back up and vote to show the kids the BOS stands with them.

Bob Szwajkos, resident of Newtown Borough said he is here to show his support for the youth who have come tonight and for the 150 youth from 55 different schools who attended the Love is Love Prom on February 15. He asked the BOS to show their support for a segment of the population who face tremendous challenges simply because of their sexual orientation and identity. Mr. Szwajkos explained his own challenges coming out as an adult and then briefly reviewed the history of the gay community. He said these young individuals have the opportunity to be out, but they are still fighting and all they are asking for is support. Mr. Szwajkos feels the Board has failed this group of young people by not adopting the Love is Love resolution and is urging the Board to reconsider their actions tonight.

David Bria of Yardley, speaking as an alumnus of the Rainbow Room in Doylestown, echoed how important it was that they put together the LGBTQ prom; he said discrimination happens all the time and shared two recent examples. Mr. Bria said the BOS has an opportunity to send a message this evening and asked them to adopt the Love is Love resolution.

Reading of the Resolution and the Vote

Toll Brothers AOP - Conditional Use Decision: Mr. Sander reported the BOS held a conditional use hearing on February 26 for a use B-12 cluster development in the CM district. The hearing was closed and the Board deliberated. Mr. Sander said this action does not allow developer to begin construction, they still must go through the land development process where issues such as final layout will be reviewed. Resident Joy Ann Charlton said the property is zoned CM and the BOS does not have to approve this use. She referred to the Joint Comprehensive Management Plan and cited several sections of the Joint Municipal Zoning Ordinance while expressing concerns about the traffic, safety issues and ground water problems that this proposed development will bring. Ms. Charlton reminded the BOS they have a duty to make responsible decisions and she urged them not to approve this decision tonight.

Mr. Calabro asked what the recourse would be should the BOS not approve this application tonight. Mr. Sander replied there is no recourse provided a full written decision is issued within 45 days. In response to Mr. Calabro’s additional questions, Mr. Sander said if approved, Toll Brothers will proceed and if denied they can appeal or apply for a by-right plan which could have 60 plus homes spread evenly across but leaving no preserved open space and increase traffic by about 50%.

Mr. Calabro moved to table the conditional use decision for Toll Brothers AOP to the next agenda. Mr. Oxley seconded. The motion passed 5-0.

Police Report: Chief Hearn reported there were 1562 calls for service during February including 16 arrests, 70 traffic accidents, and 229 citations (for more details, read "February 2020 Newtown Township Police Report: Sycamore Street Burglaries, Mill Pond Road Traffic 'Blitz Initiative,' Harassment"). He said there were four commercial burglaries along Sycamore Street and the suspect was apprehended and charged. The Chief said a social media post regarding traffic issues on Mill Pond Road generated a blitz which resulted in 28 citations and 5 warnings. He asked residents to report issues to the police department and not social media, as the department may not see it. Drug take back day is April 28 and March 18 is coffee with a cop at Chick-fil-A. Chief Hearn said Bucks County is being targeted with theft from autos and the PD and ESD are aware of Covid 19.

Planning Commission: Penns Trail Investments - who presented a preliminary as final plan for land development at 3 Penns Trail. They revised the original proposed 24K square foot, two story office building to a one-story building slightly less than 19K square feet. Responses were provided to the review letters an all items are will comply. The intended use for the building was presumed to be medical, however it won’t be known for sure until a tenant is secured. The Commission members who were present supported this application.

JMZO E-30 Amendment to Zoning Ordinance: [The Commission reviewed the amended ordinance for short term rental revising the definition of “family” and after a lengthy discussion found it to need further clarification. The solicitor will attend the Jointure meeting on March 5 to determine the purpose of this amendment and get additional details.] For more details, listen to discussions here: "Discussions of E-30 Zoning Amendment."

Environmental Advisory Council: Mr. Mack reported the EAC has a HOA forum on April 6 and they are working on getting the information out to the HOA’s. He said the EAC also adopted a set of recommendations for environmental provisions to be included in the Comprehensive Plan which will be submitted to the PC. Additionally, an EAC representative would like to attend a future BOS meeting to discuss drafting a resolution in support of a voluntary ban of single use plastics in the Village of Newtown Shopping Center; they are participating in Earth Day at Core Creek Park and would like to write an article for the green corner of Township newsletter.

Not all motions may be included. 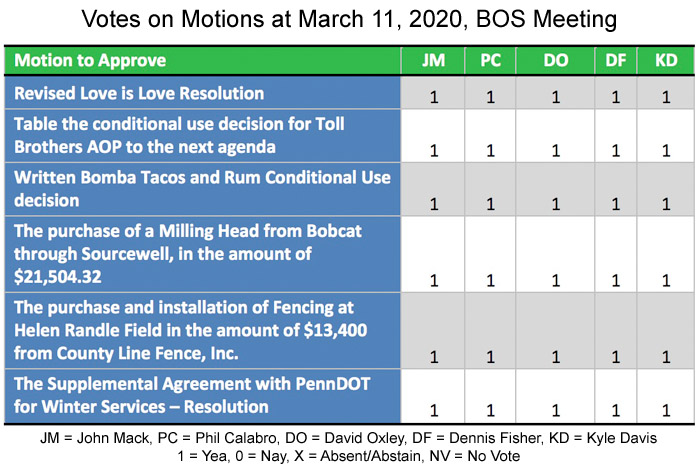