The following is a brief summary of the May 12, 2021, Newtown Township Board of Supervisors (BOS Definition) public meeting based upon the official minutes of that meeting, which you can find here. You also can view the video archive here. Also see the (UNOFFICIAL) 2021 Voting Record of Newtown Supervisors, which is updated frequently.

Sycamore Street Storm Drain Stencil project proposed by Eagle Scout, Troop 99: Michael Wysnewski of Scout Troop 99 was in attendance to review his project to continue the stenciling storm drains on N. Sycamore Street to alert residents about the hazards of throwing trash down the drains, as these inlets bring stormwater to the Delaware River, Delaware Bay and eventually to the Atlantic Ocean.

Planning Commission - Fred Beans Revised Final Plan: Chairman Allen Fidler reported that at its May 4, 2021 meeting the Commission reviewed the revised final plan for land development for Fred Beans Ford, 10 N. Sycamore Street. The applicant proposes to revise the expansion plan which had been approved in January of 2018 to reduce the showroom addition from 4,507 square feet to 1,321 square feet, and increase the setback for the new façade. The dealership currently has 10 display parking spaces in front. This will be reduced to 8 parking spaces.

Mr. Mack asked about sidewalks and other amenities in the original plan.

Planning Commission - Review of Permitted Uses in the LI and OLI Zoning District: Mr. Fidler said that at this same meeting, Township Planner Michele Fountain provided an overview of current zoning in the Newtown Business Commons and led the preliminary discussion on possible expansion of the permitted uses, with a goal of enhancing revenue to the Township, either by bringing in new, high wage businesses or by creating a more attractive environment for the current business tenants, and possibly for nearby residents. The Commission has generated a preliminary list of uses to be considered and explored further, including expanded eating place and eating place take-out (focusing on casual dining), service businesses such as salons and dry cleaners, a possible entertainment overlay for venues like theater or bowling alley uses and shared workspace uses for office and laboratories.

Mr. Mack had some concerns about the impact of some of these proposed new uses on nearby residential developments.

Mr. Fidler reminded the Board that the Planning Commission has always been sensitive to the concerns of nearby residents, as was exhibited when the Commission considered a dog daycare center. The overlay concept would be useful in keeping a distance between residential and commercial uses. In response to Mr. Mack’s further comments on sidewalks, Mr. Fidler said that the Commission is aware of the desire for walkability. There had been a plan for trails developed some years ago and has been referenced when the Township is considering new land development.

Ass’t Secretary/Treasurer: Mr. Mack reported that he had attended a meeting of the Bucks County Tax Collection Committee and heard an update from Keystone. There is some question about people working from home but paying income tax to the City of Philadelphia. He will keep the Board informed on this.

Solicitor’s Report - Professional Services Agreement for Planner for ZHB Appeal: Mr. Sander explained that a postponement has been granted for the WaWa Zoning Hearing Board appeal, in order for the Township to prepare its case. He is recommending that the Township retain the services of David Babbitt, Planner, as an expert witness for the hearing on June 3, 2021.

Discussion of motion: Mr. Mack asked whether he can telephone Mr. Babbitt to discuss his testimony. Mr. Calabro said that he would prefer if the Township organized its questions and concerns and two supervisors were included in any calls with this planner.

Discussion of motion: Mr. Mack asked whether the work involved would impact the trail system in the park. He also noted that the cost is about $40,000 more than the grant amount.
Ms. Colubriale said that this phase is not close to any of the trails.
Mr. Lewis said that the project was included in the 2021 budget, paid with recreation capital funds. The grant has a 15% match requirement. The Township will have 3 years to complete the project.

Police Report: Police Chief John Hearn reported that in the last month the Department responded to 1708 calls for service and made 20 arrests. 15 cases were referred to the detectives, who worked with the FBI. He reminded everyone that May 22, 2021 is the Police Consortium test to become a police officer. He urged anyone interested to take the test.

Mr. Mack asked about last month’s drug take back day. Chief Hearn said that Newtown collected 163 pounds of discarded narcotics and other prescriptions that day, and 494 pounds in the month. Mr. Mack commented on the increased use of Narcan by officers. 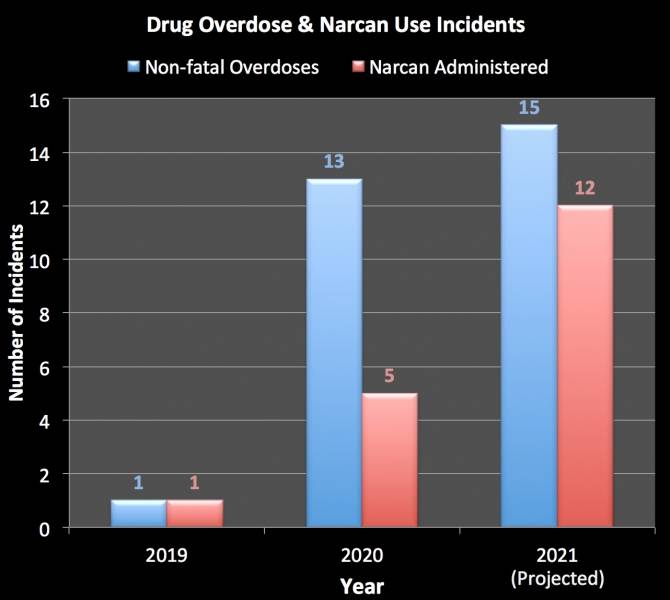 The following are my personal notes that I used to prepare for this meeting. You can also download the PDF version here.